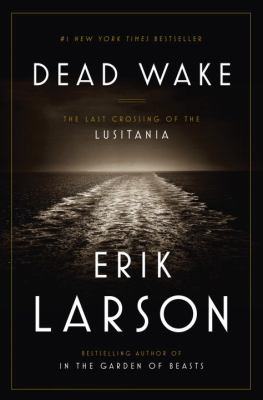 Dead Wake: The Last Crossing of the Lusitania by Erik Larson

The Lusitania, a British ship in the Cunard Line, was considered the most elegant passenger liner of its day. It was fast and luxurious, and a trip aboard was worthy of excitement even for third-class passengers. Yet on its last trip in May of 1915–during World War I–it was a floating target for German U-boats.

On May 1, 1915, the Lusitania left New York City to return to its home port of Liverpool. The Imperial German government had issued a warning in newspapers all over America that passengers should beware of traveling on the ship in a war zone (which it would have to do to reach Liverpool). Passengers seem blithely ignorant of the dangers despite that warning. Several reasons are given for this, including the busyness of preparing for such a journey (no time to read the paper), the assurances of Cunard lines that it was safe, and the fact that the ship was to be accompanied in British waters by a British Naval escort (sadly, it was not).

The Lusitania was sunk off the coast of Ireland on May 7, 2015 by the German submarine U-20. Nearly 1,200 people were killed, including children and babies. Of these, approximately 125 were Americans. Although the United States did not immediately enter the war, the heartless sinking of the Lusitania–without warning and against rules of warfare–was a factor that turned the previously neutral Americans against Germany and was the foundation of their willingness to fight on the side of the British.

Since these facts are well known, a reader may wonder what Larson will have to say about the last trip of the Lusitania. Yet, as he did in The Devil in the White City and In the Garden of Beasts, Larson creates a thriller. This time, a thriller of a chase in which the reader learns about submarine warfare. She becomes very interested in the lives of several passengers, whose hopes, dreams, and accomplishments are detailed.

One of the main characters in the book is not a passenger, but rather President Woodrow Wilson. During the war, he is in such grief over the death of his wife that he felt that he wanted to die. Later, he finds a new love and is pretty love sick and distracted as he tries to keep the country neutral in an environment where that is less and less possible. The discussion of his course and decisions make the reader realize just how human powerful world leaders are. This is also true of the discussion of Winston Churchill, who seems to act less on the best interest of passengers in danger and more with a willingness to allow a tragedy that will bring the United States into the war, thus helping Britain. Due to submarine warfare, the British were losing far more battleships than they could afford to.

German submarines or U-boats were taking out a lot of British ships. In response, the British were flying their ships under false flags. The Germans retaliated by saying that they would hit any ship that was in British waters around the British Isles, including neutral merchant ships and passenger liners. This made it very dangerous for passengers to cross the ocean. Generally speaking, the British, including Churchill, didn’t believe this would happen. It was too savage. However, Larson points out that mystery writer Sir Arthur Conan Doyle (of Sherlock Holmes fame) wrote a short story about just such an incident a year-and-a-half before the war began. Unfortunately, people thought it was pure fantasy.

Some of the best parts of Dead Wake are the discussions of Captain Schwieger and the German crew of U-boat 20 as they hunt down and torpedo ships. The submarine or U-boat life is difficult. The heat is intense and the atmosphere swampy due to the refiltering of oxygen. The men never bathe (no water) and all smells hang in the air–fried fish and onions, the toilet, etc. Yet U-20’s captain and crew are vicious predators, often ignoring the rules of warfare and foregoing warnings that would save lives in an effort to rack up hits and sink as much tonnage as possible–the measure through which the German Navy judges them successful.

Equaling the description of life aboard a submarine is the intrigue in Room 40–a British spy secret which shows that the British, headed by spymaster Blinker Hall, know a great deal about U-20 and its whereabouts, possibly enough to prevent the sinking of the Lusitania. The questionable choices of British Naval Intelligence officers frustrate the reader, who can’t put the book down, hoping that they will alter their course in an effort to save innocent lives.

High school housekeeping: Although Dead Wake is an adult book of average length (430 pages), it’s longer than most YA books. But it is perfect for the student interested in history.

The preparations for the voyage and the insights into the lives of many of the passengers bring them to life. The reader cares about them, and this makes the many deaths the truly great tragedy that it is.

In addition, the reader gets a feel for what life was like one hundred years ago. Some of the stranger aspects include a general interest in the occult, including the use of Ouija boards and seances with psychics. And then there is life on a luxury liner–the food, the games, the things people do to occupy their time.

The suspense of the shipwreck and its aftermath is engaging for teens. Passengers and crew alike see the bubbling wake of the torpedo as it rushes toward them for an agonizing 35 seconds. Though they believe the ship won’t sink, within 15 minutes they realize the truth as it lists more and more. Sadly, many lifeboats become useless. On one side, they hug the boat; on the other the tilt of the sinking ship moves them too far outward to easily board. People panic, running to find their children, who are playing just about anywhere on the giant ship. People jump overboard, sometimes without their life vests. Some of them are pulled under in the wake of the ship and never surface. It’s a horrifying scene. Larson describes all this, allowing the horror to arise from facts rather than descriptive gore. And, of course, good writing helps the reader to connect this tragedy to the general tragedy of war and the countless lives that are regularly lost because of it.
I highly recommend Dead Wake to teens who are interested in history, in the 1910’s, in WW I or in submarine warfare.

I'm a high school librarian, formerly an English teacher. I love to read and my mission is to connect people with the right books. To that end, I read widely--from the hi-lo for reluctant high school readers to the literary adult novel for the bibliophile.
View all posts by Victoria Waddle →
This entry was posted in Historical Fiction/Historical Element, Non-fiction, Over 375 pages and tagged Adult books for teens, American History, book reviews, Dead Wake, Erik Larson, history, Lusitania, nonfiction, submarine warfare, submarines, U-boats, US History, Woodrow Wilson, WW I. Bookmark the permalink.