Adult Books for Teens: Common Core: Nonfiction: “In the Garden of Beasts”

In the Garden of Beasts by Erik Larson 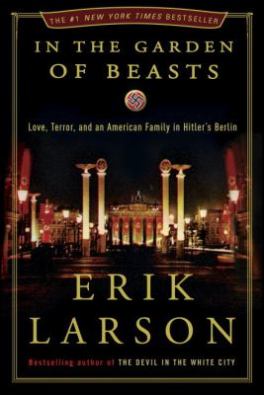 William E. Dodd wasn’t President Franklin D. Roosevelt’s first choice for United States Ambassador to Germany in the early 1930s, just as Adolf Hitler rose to power–nor even the president’s second or third choice. And Dodd himself had good reason to refuse the post (as others had done). He was a history professor at the University of Chicago, who was working on a multi-volume history of the Old South. It was the great goal of his life to finish that work. He was already in his early 60’s, which was fairly old in the 1930’s when people didn’t live as long as many do now. But Dodd and his wife had ambitions for him, and there was prestige in the post. So the couple took both of their adult children and set off for Germany.

In 1933, Hitler, then Germany’s chancellor, was consolidating his power. The president of the German Weimar Republic was still alive, but he was ill. Hitler was in the process of surrounding himself with men who would bend themselves to his will; he was blaming the Jews for the defeat of Germany in WW I and for Germany’s economic woes. Already, there were sanctions and violence against German Jews. Dachau was the model for other concentration camps. Euthanasia of ‘idiots’ and people that the German government considered imperfect was gearing up. Even Americans who visited Germany, unaware of the brutal culture that had become the norm, were frequently hauled off and beaten in prisons for not giving the Hitler salute when a procession of storm troopers passed.

Imagine walking into this charged political atmosphere as a new Ambassador to Germany from the United States. Dodd and his family didn’t grasp what was happening. Dodd had studied in Germany in his youth and had a deep affection for the German people. For him–and for everyone around him–Hitler and the men surrounding him (Hermann Goring, Joseph Goebbels, Heinrich Himmler) seemed like a group of buffoons. They were thought of as overgrown adolescents whose power couldn’t be maintained. They were just too ridiculous, too power hungry, too ruinous for Germany. Everyone was waiting for them to be tossed from power within a year or so.

In The Garden of Beasts looks at the rise of Hitler, mainly through the viewpoints of Dodd and his daughter, Martha. Martha appeared to think of herself as more daring and unconventional than the reader sees her. While it is true that her sexual mores were unconventional for the 1930s–she had many affairs, including with Nazi officials–Martha fell prey to surface appearances. At first the Nazis and SS men seemed decent to her because they were charming. She was also quite taken in by Soviet-style communism and fell in love with a Russian diplomat. She was disabused of her Soviet fantasy when she visited the USSR. Eventually, there was no denying the outrageous brutality of the Nazis. Martha came to understand how frightening they were.

William Dodd, although he wanted to give the Nazis a chance, came to a quicker understanding of their true nature than his daughter did. He was living in a country where the word “fanatic’ had become a positive way of describing someone. Neighbors were reporting neighbors to the German police; everyone lived in a constant state of fear. Dodd tried to sound a warning to government officials and anyone who would listen that the Nazis were bent on destroying Europe and its culture. That  they were preparing for war. That the United States would probably have to get involved.

The purge of June 30, 1934, ostensibly for treason, appeared to prove the hopelessness in belief that Hitler’s power was a passing fad. This was the date that Hitler appeared to become all powerful. The murder of any official–of any person who might possibly have been critical of Hitler–was a weird thing to happen in a European country in the twentieth century. Yet ordinary people, tired of storm troopers terrorizing them, at first thought the executions are a great thing that would bring some relief.

Afterward, so much savagery took place in Germany that June 30, 1934 may seem to us just the beginning of a dictatorship. But the takeover of the German government wasn’t beyond stopping at this point. However, in August, President of the Weimar Republic, Paul von Hindenburg died. Hitler’s power became absolute.

High school housekeeping: This is an interesting read by the author of The Devil in the White City, which I have also recommended to my students. The use of diaries written by the ambassador and his daughter provide interesting primary source documentation of the events and personalities of the Third Reich. Larson also uses other sources for research, so there’s much to be learned from your reading. What will be most striking to you is how almost no one understood what was taking place in Germany and how it would affect the world.

I'm a high school librarian, formerly an English teacher. I love to read and my mission is to connect people with the right books. To that end, I read widely--from the hi-lo for reluctant high school readers to the literary adult novel for the bibliophile.
View all posts by Victoria Waddle →
This entry was posted in Historical Fiction/Historical Element, Human Rights Issues, Non-fiction and tagged Adult books for teens, assassinations, Common Core, Common Core standards, Germany, Hitler, human rights, Martha Dodd, memoir, Nazis, nonfiction, William E. Dodd. Bookmark the permalink.

2 Responses to Adult Books for Teens: Common Core: Nonfiction: “In the Garden of Beasts”