“How to be Brave”

How to be Brave by E. Katherine Kottaras 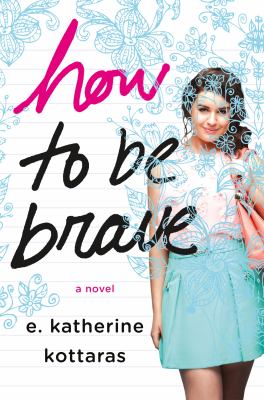 Georgia Askeridis defines herself through her fears, which are many. She has every right to remain the girl in the shadows. Her severely overweight mother has recently died of complications of obesity and diabetes. Georgia begins her story with her own early shame at her mother’s size, which she thinks of as ‘planetary’ next to others. With her mother’s death, she must work through the guilt she feels at having been embarrassed to be seen in public with her mother, Diana. Because her mom was so much more than fat.

Diana was the one who promised Georgia a beautiful shining life. The one who saw that Georgia is stunning in a bright orange dress. The college instructor. The artist, who was constantly painting and creating. At the end, not knowing what else to ask for, Georgia has her mother write to her. After writing that Georgia has filled her life with joy and pride, her mother ended by telling her, “Do what I never did. I lived too fearfully. . . . do everything. Try it all once.”

So, on the first day of her senior year, Georgia begins her journey to be brave. To start over and live for her mother. She is immediately challenged by the school mean girls, Avery and Chloe. But Georgia has backup in her great friend, Liss. And she actually has a conversation with cute Daniel Antell.

After learning about Georgia’s mother’s letter, Liss decides a bucket list is in order. But, as Georgia has no plans to die soon, it becomes a ‘I Want to Live Life’ list. Liss will join in on the fun, some of which is daring (skydive), some of which is just fun and new (learn to fish, do tribal dancing) and some of which would earn a parent’s disapproval (cut class, smoke pot). But vowing to ask Daniel out on a date and kiss him are the two most frightening (and if she succeeds, rewarding) challenges of all.

Once Georgia and Liss meet Baseline Evelyn (so called because she has to take drug tests every month to prove to her parents that she hasn’t been using), the trio are ready for all the challenges on the ‘Want to Live’ list. Or so Georgia believes. But during her senior year, she discovers something not on the list–her own artistic talent, her own mode of brave expression.

As things don’t always go well, and Georgia finds herself on the losing end of love and friendship, she has to ask herself: who am I doing this for, and what does it mean to live for myself?

High school housekeeping: How to be Brave is both poignant and fun. Georgia’s journey is particularly difficult because she has lost her mother. She’s a good, struggling girl, who needs to find herself and in doing so, makes some mistakes (and launches quite a few F-bombs). These mistakes, as well as Georgia’s sense of herself and of her place in her world are highly relatable for most teens, who will connect to both her elation and her despair. Her grief over the painful and difficult death of her mother is often evoked in free-verse poetry that transforms the experience. The more Georgia worked through her “I Want to Live Life’ list, the more I liked her. I’ll be purchasing more copies of this one and book talking it because I’m absolutely sure that you’ll root for Georgia as I did.

I'm a high school librarian, formerly an English teacher. I love to read and my mission is to connect people with the right books. To that end, I read widely--from the hi-lo for reluctant high school readers to the literary adult novel for the bibliophile.
View all posts by Victoria Waddle →
This entry was posted in bullying, Family Problems, Fiction, Grief, Romance, Young Adult Literature and tagged book reviews, diabetes, E. Katherine Kottaras, grief, How to be Brave, romance, YA fiction, YA literature. Bookmark the permalink.