Adult Books for Teens: “Between the World and Me”

Between the World and Me by Ta-Nehisi Coates 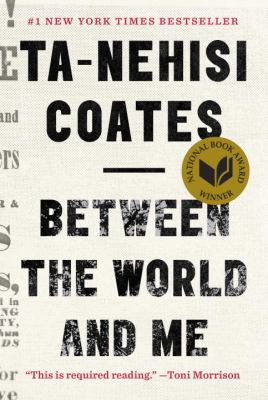 Often books have an opening sentence–or a sentence very early in–that summarizes the significance of the work. The above sentence does this in Between the World and Me.

Between the World and Me is a letter to the author’s son, Samori. Coates is helping his son define how to live and in doing so, is having a conversation with African American youths. To do this is to have  an honest conversation with us all about what it is like to be an African American male in contemporary America. And in doing this, Coates needs to talk about his own life, his own experiences, his own body. And thus, he must address the history of race relations in the Unites States, which means he must address the concept of race and how it has been created by racism rather than vice versa. To this complex layering of the most perplexing and significant issue in the history of the country, add great writing, and it’s no wonder Between the World and Me is the recipient of multiple awards, including The National Book Award for nonfiction.

Coates immediately addresses the issue of the black body in danger because it is black.

“That was the week you learned that the killers of Michael Brown would go free. The men who had left his body in the street like some awesome declaration of their inviolable power would never be punished. It was not my expectation that anyone would ever be punished. But you were young and still believed. You stayed up till 11 p.m. that night, waiting for the announcement of an indictment, and when instead it was announced that there was none you said, ‘I’ve got to go,’ and you went into your room, and I heard you crying.”

While I don’t usually quote a book at length, I do so in the following because this direct address to his son is an admonition to us all–we shouldn’t be looking away, can’t be looking away if we expect change.

“I write you in your fifteenth year. I am writing you because this was the year you saw Eric Garner choked to death for selling cigarettes; because you know now that Renisha McBride was shot for seeking help, that John Crawford was shot down for browsing in a department store. And you have seen men in uniform drive by and murder Tamir Rice, a twelve-­year-­old child whom they were oath-­bound to protect. And you have seen men in the same uniforms pummel Marlene Pinnock, someone’s grandmother, on the side of a road. And you know now, if you did not before, that the police departments of your country have been endowed with the authority to destroy your body. It does not matter if the destruction is the result of an unfortunate overreaction. It does not matter if it originates in a misunderstanding. It does not matter if the destruction springs from a foolish policy. Sell cigarettes without the proper authority and your body can be destroyed. Resent the people trying to entrap your body and it can be destroyed. Turn into a dark stairwell and your body can be destroyed. The destroyers will rarely be held accountable. Mostly they will receive pensions. And destruction is merely the superlative form of a dominion whose prerogatives include friskings, detainings, beatings, and humiliations. All of this is common to black people. And all of this is old for black people. No one is held responsible. There is nothing uniquely evil in these destroyers or even in this moment. The destroyers are merely men enforcing the whims of our country, correctly interpreting its heritage and legacy. It is hard to face this. But all our phrasing–­race relations, racial chasm, racial justice, racial profiling, white privilege, even white supremacy–­serves to obscure that racism is a visceral experience, that it dislodges brains, blocks airways, rips muscle, extracts organs, cracks bones, breaks teeth. You must never look away from this.”

Coates reveals his own past as he contemplates the burden that racism has placed on his back. He immerses the reader in details of his childhood in Baltimore, of his youth at the traditionally African- American Howard University (‘the Mecca’), of visits to Civil War battlefields, of  Chicago’s  South Side, and of  a freer sense of existence in Paris. His deep sense of injustice is anchored in the tragic killing of a Howard University classmate, not long after after Coates left the university. In 2000, Prince Jones–unarmed–was killed by an undercover police officer. Jones was the young man one images as on the road to escape such a fate–a deeply religious, kind, and smart university student with a bright future. (This is not to suggest that others deserve such a fate–but only that Jones appears to be escaping it.) He is the young man who consistently brings the book back to its center, from whom it can never drift very far.

High school housekeeping: Yes, this is a complex text, and the author dives into the deep. But it’s not very long–and if, on special display in a library, its brevity is what attracts the teen reader, that’s fine. Because the topic and the tone will carry him or her through the important task of thinking about the American concept of race, of about what it means, in Coates’ words, to ‘think you are white.’ A reader might at first consider Between the World and Me an angry book. But s/he’ll quickly realize it is really righteous outrage that drives the author to bring this discussion into our collective consciousness.

I'm a high school librarian, formerly an English teacher. I love to read and my mission is to connect people with the right books. To that end, I read widely--from the hi-lo for reluctant high school readers to the literary adult novel for the bibliophile.
View all posts by Victoria Waddle →
This entry was posted in Biography/Memoir, Grief, Human Rights Issues, Multicultural, Non-fiction and tagged #AdultBooksForTeens, #AfricanAmericanWriters, #BetweenTheWorldAndMe, #bookReviews, #Ta-NehisiCoates, #YALiteraure, Adult books for teens, African Americans, American History, book reviews, death, United States, US History. Bookmark the permalink.

1 Response to Adult Books for Teens: “Between the World and Me”