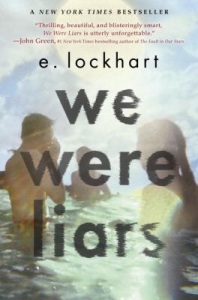 We Were Liars by E. Lockhart

As the first grandchild of Harris Sinclair, Cadence has a lot to gain. The Sinclairs are east-coast old money whose family came to the U. S. on the Mayflower. Harris owns a small island, Beechwood, where the family gathers each summer.

Two of the most important summers at Beechwood are when the Sinclair cousins–Cadence, Johnny and Mirren–are eight and when they are fifteen. At eight, they meet Gat, the nephew of the (Indian) boyfriend of one of Harris’s daughters. Gat immediately becomes one of the group, one of the Liars. But his presence creates some ethnic tension. Harris doesn’t like that one of his daughters (Carrie) has brought Indians into the perfectly tall and perfectly blonde family.

Gat returns each summer and is a great friend of Johnny’s. During the Liars’ fifteenth summer, Gat and Cadence fall in love. That much Cadence can remember, but little else. She was in an accident and hurt her head. She ends up with amnesia and horrifying migraine headaches for which she must take strong painkillers. Due to her accident, she is kept from returning to Beechwood for her sixteenth summer. During her seventeenth, she goes back and tries to recall all that happened.

With her memory loss, headaches and medicated state, Cadence is a very unreliable narrator. However, she sees her family as a sort of King Lear story–the bullying granddad with his three daughters who argue about money and inheritance. She also thinks a lot about various fairy tales and how the characters in those tales fare against magic and fate. All of her musings are interesting and pull the reader into her drama, as does her love for Gat and for her cousins. Yet because Cadence is such an unreliable narrator, the reader is in for a crazy ride and some serious shocks about what happened during “summer 15.”

High school housekeeping: If you aren’t used to reading a book with an unreliable narrator, We Were Liars is a great place to start. This novel is wildly popular with professional reviewers. For my own part, I ended with a sense of “No fair!” because it felt like the author had cheated a bit in laying out the story for me, the reader, unreliable narrator or not. But this really is a compelling story. I recommend it to all teens and particularly lovers of mysteries and family dysfunction.

I'm a high school librarian, formerly an English teacher. I love to read and my mission is to connect people with the right books. To that end, I read widely--from the hi-lo for reluctant high school readers to the literary adult novel for the bibliophile.
View all posts by Victoria Waddle →
This entry was posted in Fable/Fairy Tale/Fantasy, Family Problems, Fiction, Horror/Mystery/Suspense, Romance, Young Adult Literature and tagged book reviews, E. Lockhart, family problems, mystery, parent-teen relationships, Teen Issues, We Were Liars, YA fiction, YA literature. Bookmark the permalink.