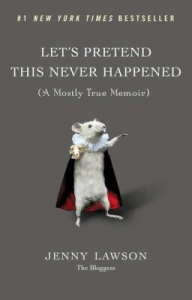 Jenny Lawson grew up in Wall, Texas, a small rural town that it was her goal to escape. Just as in many such tales, we find that in adulthood, the author looks back on the extreme weirdness of her childhood with fondness. And that, yes, she does want to go home again.

The big difference with Lawson is that her recollections are wildly funny rather than nostalgic. I always have students looking for humorous books. If you can handle some profanity (and some common but appropriate terms for body parts–more on that in a later paragraph), this may be your book. And it doesn’t just pander to a need for low humor. It does a great job of showing how some of the most upsetting or mortifying events from childhood can be some of the most useful in simply sensing that you’ve had a life, that you’ve had some fun, that you are not just interchangeable with your friends and neighbors or with kids who grew up in another place.

Most of the wacky events of Lawson’s childhood stem from the facts that her family is fairly poor and that her dad runs a taxidermy shop next to the house. He is always collecting road kill and using both dead and live animals to play jokes on the kids. The family has a pet raccoon until it nearly takes Jenny’s sister’s face off. One of the tribe of turkeys that their dad keeps lands Jenny in a hilarious scene when it follow her to high school and poops everywhere. When they are older, Dad plays jokes on Jenny’s fiance. The first time they meet, Jenny’s dad throws a baby bobcat on Victor to see how he’ll react. He puts baby ducklings in the house to amuse his grandchildren.

It’s small wonder that Lawson ends up with an anxiety disorder, but even that is fodder for wisecracking. And Lawson is just so funny.

After Lawson marries Victor, there is more craziness in their household–they have a surprising number of arguments about how the zombie apocalypse will come off–and in their jobs. Lawson works in a human resources department and has side-splitting stories about the strange things that people do when they apply for jobs–and the entirely inappropriate things they do once they have jobs.

There are a few things that are treated seriously–Lawson has three miscarriages before delivering her daughter, and, well, that’s just not funny. She also has rheumatoid arthritis, which can be both painful and debilitating. But overall, for those of us with little knowledge of rural lives, guns, and wild animals, this memoir is a hoot.

High school housekeeping: Caveat–Lawson uses the f-word a lot. There are also sections at the end of the book–an epilogue, an ending, and then yet more stuff–that aren’t very funny. I’m not sure why they are there, except for the opportunity to use the word ‘vagina’ as much as possible. And while there’s nothing wrong with the word vagina, I think that Lawson is only hoping to get a laugh out of the reader. Which fails. She would have done much better to quit at the end and not add the extras.

Oh–I think it goes without saying that Lawson is exaggerating about most of what happened in her life so that she can get a laugh. But just in case–now you know.

I'm a high school librarian, formerly an English teacher. I love to read and my mission is to connect people with the right books. To that end, I read widely--from the hi-lo for reluctant high school readers to the literary adult novel for the bibliophile.
View all posts by Victoria Waddle →
This entry was posted in Biography/Memoir, Family Problems, Mature Readers, Non-fiction and tagged Adult books for teens, autobiography, biography, humor, Jenny Lawson, Let's Pretend This Never Happened, memoir, rural life, Texas, Wall Texas. Bookmark the permalink.