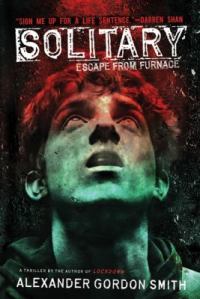 Solitary: Book Two of the Escape from Furnace series

Just a quick heads up on this series. I reviewed the first book, Lockdown here. I thought it was great entertainment and a perfect choice for guys who have a hard time finding a book they like. I wanted to continue the series and see if the same quick-paced action/adventure continued. It does.

This time Alex is locked up in solitary confinement after his escape attempt. The cell is more like a coffin standing upright. His buddy Zee is also locked in a solitary cell nearby and the two figure out a communication system that helps them stay sane. Still, Alex has many hallucinations, particularly of his old cellmate Donovan, who was taken by the men in black suits and the Wheezers in book one.

The Wheezers are back as are the mutant rat boys, only this time they are out for Alex’s blood. In Solitary we also get a good look of the horror of the infirmary—we figured Donovan had been taken there to be transformed into some sort of creature at the end of book one. Now we know for sure.

This book, like the first, certainly has lots of disturbing images and description. It’s hard for me to say why it doesn’t bother me in the same way that it bothers me in many books. I think, for me, it all plays pretty well into the nightmare of Furnace, so it doesn’t have the same gratuitous feel that I’ve experienced with other science fiction for reluctant guy readers. However, I’ll give you an idea of what some professional reviewers thought:

So, that’s the caveat (warning)—meanwhile, I’m on to book three, Death Sentence.

I'm a high school librarian, formerly an English teacher. I love to read and my mission is to connect people with the right books. To that end, I read widely--from the hi-lo for reluctant high school readers to the literary adult novel for the bibliophile.
View all posts by Victoria Waddle →
This entry was posted in Fiction, Hi-Low/Quick Read, Human Rights Issues, Mature Readers, Read 180, Sci-Fi/Futuristic, Young Adult Literature and tagged Escape from Furnace series, guy books, Read 180, reluctant readers, science fiction, YA fiction, YA literature. Bookmark the permalink.