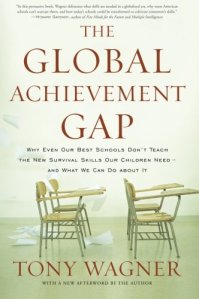 Although this entry deals with significant ways in which education will change—and thus affect students’ lives—it’s written for teachers. Our principal has asked that we teachers read and discuss this book. (He bought 20 copies, and these can be checked out at our school textbook room.)

The Global Achievement Gap: Why Even Our Best Schools Don’t Teach the New Survival Skills Our Children Need—

I’m glad we’re reading this book, if only for this chapter. I was so happy—validated—to see so many of my own thoughts, as well as the ideas I’ve culled from my reading, packed into this chapter that I was highlighting to the point of absurdity. (All the while thinking, “Yes!” “Exactly!” “Obviously!”) I will try to tighten up my enthusiasm here and be more succinct.

Wagner begins the chapter with real questions from standardized tests—from Texas, considered to have mediocre state standards, and from Massachusetts, considered to have high standards. I tried the test questions, quickly dispatching the English and social studies, and then sensed that somewhere in my brain resided the skills to work out the math, but it had been so long since I’d visited those skills that I couldn’t take the time to knock on all the necessary doors. I flunked the math.

Well, this played right into Wagner’s plan—apparently this is common, as is my sense that the possible answers to the questions on Whitman’s poem were stupid and the best way to answer would have been in an essay. The surprising gotcha was the fact that I am not competent to graduate from high school. Ouch.

This exercise leads to a conclusion that most educators made long ago: standardize tests aren’t useful; they don’t measure readiness for college or work; they don’t reflect the actual high school graduation rate. So the question is: why do we administer these tests? (I might add at great expense, when the money could be spent on more useful things. Further on in the chapter, Wagner does note that there are hidden costs to inexpensive testing.)

History of the issue

Wagner gives the reader some history. Basically giving such tests is politically expedient, and while very expensive, it’s cheaper than giving a meaningful test, which would be harder to assess. A few details:

Another area where we are misspending our energy is in advanced classes, such as Advanced Placement (AP) courses. These courses do little to prepare kids for college and some colleges no longer offer credit for them. (As a mom, I have some insight on this. I have three sons. Among them they have a good 20 AP courses completed, and 4-5 on the tests. Whether they got credit depends on the specific school—not the system. UCSD gave credit for courses that UC Davis didn’t. It also depends on the student’s major. The son who majored in biotechnology got ‘elective credit’ for all his AP science and math. This actually put him in the terrible position as a ‘first quarter, first-time away from home and family’ freshman of taking a full load of all hard science classes, some upper division. His easier requirements were already fulfilled, and he wouldn’t get any credit by taking electives, English courses, etc. We’re lucky he didn’t have a nervous breakdown. What a mistake!)

Necessary (Applied) skills according to business leaders: These are pretty much the Seven Survival Skills that Wagner details in Chapter 1, but business leaders label them differently. Here they are named: professionalism and work ethic, oral and written communication, critical thinking and problem-solving, teamwork and leadership, reading comprehension and ethics and social responsibility. (I gave a lot of detail about the Seven Survival Skills from Chapter one here.)

Necessary skills according to college students: In a later section of the chapter, Wagner asks college students what they should have learned in high schools. The answers were: writing; research skills; time management; and learning to work with other students in study groups.

Necessary habits of mind according to David Conley, based on his research: “‘intellectual openness; inquisitiveness; analysis; reasoning; argumentation and proof; interpretation; precision and accuracy; and problem solving.’” The ‘overarching academic skill’ is writing and research.

Once we teach the right stuff, how do we test for it (accountability)?

Math/Science: Wagner discusses the international PISA and the test makers’ definitions of scientific and mathematical literacy. These include concepts of the disciplines as having real-world roles that shape intellectual and cultural environments. Competent practitioners use them to meet their life needs as “constructive, concerned and reflective citizens[s].” He notes that many countries use open-ended interviews rather than multiple-choice tests.

Writing Skills: Wagner also slams writing by formula and the testing of it. (If you’ve read this section of the book, you probably had the same reaction as Wagner did—as I did when reading the formula essay—“Lord Baltimore?” That kid didn’t read Harry Potter—he watched the movie. I disagree, however, that the Potter books are just for 9-12 year olds.) A dean of admissions at Sarah Lawrence College notes, “Such an essay is ‘not reflective of how our students are going to have to write’ many lengthy papers based on long-term research, analysis and discussion.”

Citizenship (through U.S. History courses): tests of citizenship should be more like that required to become a citizen—this includes analysis. (Which amendment in the Bill of Rights is the most important and why? Cite evidence from history and current events.) Another example is the ‘letter to the editor test’: research an issue; summarize pro/con arguments; write a letter to the editor of a local newspaper; mail it. Think in terms of students as ‘jury-ready.’ (This idea touched a nerve in me—I’ve been on many juries, judging defendants on trial for murder and attempted murder among other things. I was amazed at what passes for analysis in some minds.)

We teach, we test—so we come to the real question: How do we define rigor?

Today, information is hard to memorize. There’s too much of it and it changes too quickly. (Wagner calls it a tidal wave; school librarians refer to it as a fire hydrant—you can’t put a kid in front of it [Internet] and then open it without giving him information literacy skills first.)

The most important skill a person can have is to ask the right question. “Studying academic content is the means of developing competencies, instead of being the goal. . . . It’s no longer how much you know that matters; it’s what you can do with what you know.”

How do we keep students motivated?

Not by teaching to the test. A national survey shows that half of the dropouts polled left school because they were bored. Eighty-eight percent of those dropouts had passing grades when they dropped.

If our accountability systems tested for the core competencies mentioned above, we’d have both rigor and engagement. Examples of such tests exist—The Collegiate Learning Assessment (CLA), the College and Work Readiness Assessment (CWRA) and the PISA are three. Ironically, the CLA is much cheaper to administer than AP tests and students think it is valuable. Working from these models, we should develop higher-quality tests allowing open responses, give these tests less frequently and only to a sample group of students. This makes the institution accountable rather than individual students or teachers. We can also test information and technology skills (The Information, Communication, and Technology Literacy Assessment—iSkills Test—is an example.)

We have to accept that giving these tests is more expensive. Yet they test not just analytical skills (which the SAT may do) but also creative and practical skills, the other two types of intelligence, according to Robert Sternberg.

Wagner notes that having 50 separate state academic standards is a big mistake, but as the Common Core is coming, I won’t give his details. He wonders if we have the political will to give meaningful standardized tests.

Victoria’s note: I can’t walk away from this without one note about the PISA—recent studies indicate that the U.S. doesn’t perform so badly. I know you are crazy busy, but here are three articles that are well worth your time:

I'm a high school librarian, formerly an English teacher. I love to read and my mission is to connect people with the right books. To that end, I read widely--from the hi-lo for reluctant high school readers to the literary adult novel for the bibliophile.
View all posts by Victoria Waddle →
This entry was posted in Non-fiction and tagged 21st century learners, critical thinking, education, educators, Global Achievement Gap, high school students, life skills, lifelong learning, teachers, Tony Wagner. Bookmark the permalink.