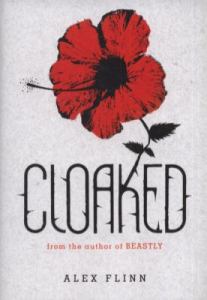 What makes Flinn’s fractured fairy tales so enjoyable is that they really incorporate magic. Elves, witches, magical articles like cloaks and rings—they are all at work in Cloaked.

Johnny Marco works at his family’s shoe repair shop in the lobby of a swanky Miami hotel. He’s repaired shoes for the rich; he’s seen the celebrity set (who usually spend money on new shoes rather than repair them). But when Princess Victoriana jets in from Aloria, his mundane life becomes a wild adventure.

Princess Victoriana sees that Johnny is a hardworking teen who values his mother. She decides to trust him and seeks his help in finding her brother, Prince Philippe, who was turned into a frog so that the princess will be forced to marry an unsavory character. In order to help Johnny on his quest, the princess gives him a roll of bills and a magic cloak that transports him wherever he wishes. She offers to marry him if he succeeds. And she is world-class beautiful.

The task is even harder than Johnny had imagined. Each time he has success, it’s because he receives a favor from a bewitched creature or a magical person. So, he always owes something in return, requiring another adventure. He has to talk to swans, round up giants, escape witches, and still find that frog. This is all just such silly good fun.

Flinn tells the reader that he’s always loved fairy tales, and here he incorporates many different tales that he thinks are not familiar enough to today’s readers. He wants teens to enjoy these stories as well. I am surprised to find that the tale of the shoemaker and the elves is no longer familiar; I thought that was a standard. But Flinn includes many others in Cloaked—the six swans and the giants were new to me. However, the tale of the frog prince is one I remember, but Flinn’s version is different—a bit less sweet.

Johnny both gets what he wants and doesn’t get what he wants—and, that is the most realistic thing about the fairytale rendering. As the Rolling Stones put it years ago, you don’t always get what you want, but if you try, sometimes, you get what you need. A fun-for-everyone read.

I'm a high school librarian, formerly an English teacher. I love to read and my mission is to connect people with the right books. To that end, I read widely--from the hi-lo for reluctant high school readers to the literary adult novel for the bibliophile.
View all posts by Victoria Waddle →
This entry was posted in Adventure Stories, Fable/Fairy Tale/Fantasy, Fiction, Hi-Low/Quick Read, Romance, Young Adult Literature and tagged fairy tale readalike, fairy tales, magic. Bookmark the permalink.