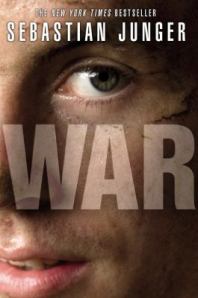 In the year between June 2007 and June 2008, the Korengal Valley was the most dangerous place for a soldier to be at war. The daily temperatures of one hundred degrees, the rough and barren terrain, as well as the many unsympathetic locals (many village elders were working with the Taliban) compounded problems for Second Platoon, Battle Company, which was involved in more firefights than soldiers in any other area of the war, sometimes in more than one battle a day.

During this period, author Sebastian Junger was embedded with Second Platoon, Battle Company. He had photojournalist Tim Hetherington with him. They shot 150 hours of videotape and used that for their documentary film Restrepo. War received many notable book commendations and has been a bestseller. Restrepo received the Grand Jury Prize for best documentary at the 2010 Sundance Film Festival and was nominated for an Academy Award for best documentary in 2011.

Junger tells us at the beginning of the book that he was wholly dependent on the Army for food, shelter, and protection, but that Army officials never tried to censor what he recorded nor to “alter [his] reporting in any way or to show the contents of [his] notebooks or [his] cameras.” So, this is a true picture of warriors in battle. Although it was published for an adult audience, it’s an important read for students who are considering joining a branch of the military because it does give such a realistic picture of war. And, it’s not a bad read for the rest of us either—Americans who are forgetting that one percent of our population is fighting this war without a whole lot of support from the rest of us.

War has scenes of intense battle and of the subsequent deaths and maiming, of how these losses affect the psyches of the men who are not physically harmed. (Junger is there when Second Platoon members are caught in an ambush and an IEU blows up their Humvee.) It also shows the boredom of the men between battles. And Junger delves into the warrior mentally in a way I haven’t read in another book. “War is a lot of things and it’s useless to pretend that exciting isn’t one of them.”

These men are some of the best trained soldiers around, but they are also undisciplined. “O’Byrne’s 203 gunner, Steiner, once got stabbed trying to help deliver a group beating to Sergeant Mac, his squad leader, who had backed into a corner with a combat knife. In Second Platoon you got beat on your birthday, you got beat before you left the platoon—on leave, say—and you got beat when you came back. The only way to leave Second Platoon without a beating was to get shot.”

Junger deals honestly with the fact that a lot of guys in Second Platoon live for the high, for the adrenaline rush, of being in a firefight, of shooting weapons. He shows that returning to civilian life is often difficult for them because they can’t get that rush back. They also can’t duplicate the intense love they have for one another in a situation where each would, without a second thought, sacrifice his life for his warrior brothers. “’I never got in trouble, but Bobby beat up a few MPs, threatened them with a fire extinguisher, pissed on their boot. But what do you expect from the infantry, you know? I know that all the guys that were bad in garrison were perfect f– soldiers in combat. They’re troublemakers and they like to fight. That’s a bad garrison trait but a good combat trait—right?’”

Adults will remember Junger’s work from the bestselling books A Death in Belmont and The Perfect Storm (which was made into a movie). This is an equally good book, and I highly recommend it. It does contain a lot of profanity—perfectly natural as the soldiers are quoted frequently.

I'm a high school librarian, formerly an English teacher. I love to read and my mission is to connect people with the right books. To that end, I read widely--from the hi-lo for reluctant high school readers to the literary adult novel for the bibliophile.
View all posts by Victoria Waddle →
This entry was posted in Adventure Stories, Controversial Issue/Debate, Historical Fiction/Historical Element, Mature Readers, Movie Tie-In, Non-fiction, Over 375 pages and tagged Afghanistan, Second Platoon Battle Company, soldiers, war, war stories. Bookmark the permalink.