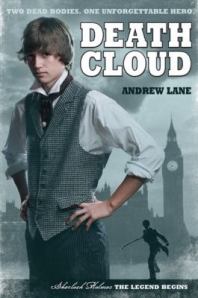 A note on the book jacket tells us that this is the first teen series endorsed by the Conan Doyle (creator of Sherlock Holmes) Estate. I’m happy to see a Sherlock Holmes book for teens that incorporates details from the life of the original character.

It’s 1868 and Sherlock Holmes is fourteen years old. His mother is ill, his father is on a military expedition and his older brother is working in London; so rather than having the summer holidays he’d hoped for, Sherlock has to go to Hampshire and live with an eccentric aunt and uncle while being tutored by an American, Amyus Crowe. But the summer doesn’t turn out as deadly dull as he thought it would—that is, it’s not dull, just deadly.

While staying true to Doyle’s character—there are even incidents that hint of Sherlock’s adult drug problems—this teen Sherlock is also updated. The poor guy is falsely accused and tortured while he tries to solve the mysterious death of local men. They appear to have died of a plague, as they have swollen boil-like pustules all over their bodies. But Sherlock is on to a ring of evil-doers and these deaths have something to do with the weird ‘death cloud’ that rises above the bodies.

Thankfully, Sherlock has the help of Matty, a self-reliant street urchin, who, while he can’t read or write and hasn’t been taught anything about logic or induction, knows a lot about human behavior at its worst—and about how to survive. Virginia, Crowe’s independent daughter, eventually joins in the fray.

The descriptions of the evil Baron Maupertuis are positively macabre. What he is able to do through the help of his minions is so creepy, it will stick with you for a long time. But even if you are reading for your senior project (Chaffey), and want some details of life in England (and a bit of France) in the mid-nineteenth century, there’s much to note. (The descriptions of what happens at a country fair are an interesting. Dog fighting—ugh! Bobbing for eels, anyone? Sherlock being forced into a boxing match?)

Sometimes YA books have quotable quotes that jump out at me, and the following fits the bill. I imagine many teens find themselves in the middle of a bizarre situation with just such thoughts.

“’You think we should go to the peelers?’ Matty asked, obviously nervous.

“‘The police?’ Crowe shook his head. ‘I doubt they’d believe you, and even if they did there’s little they could do. Whoever lives in this big house of yours will deny everythin’. They’ve got the power and the authority, not you. And you’ve got to admit, it’s a preposterous story on the face of it.’

“’Do you believe us?’ Sherlock challenged.”

I'm a high school librarian, formerly an English teacher. I love to read and my mission is to connect people with the right books. To that end, I read widely--from the hi-lo for reluctant high school readers to the literary adult novel for the bibliophile.
View all posts by Victoria Waddle →
This entry was posted in Adventure Stories, Fiction, Historical Fiction/Historical Element, Horror/Mystery/Suspense, Literary Read Alike, Young Adult Literature and tagged Chaffey Senior Project, Sherlock Holmes. Bookmark the permalink.