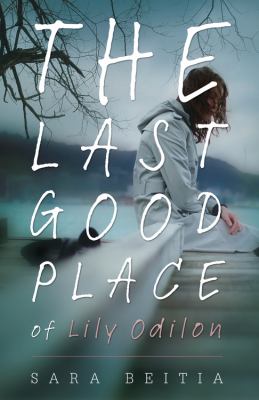 Eighteen-year-old Lily Odilon has been in trouble before. When Albert Morales meets her, there are plenty of rumors swirling around her–she had been a party girl, but isn’t anymore; she had an ‘accident’ and was hospitalized for a long time; she sometimes acts very strangely.

None of that matters to Albert. He’s the new big city kid in the small high school in the small Idaho town of Little Solace. (Is that a great name for a town or what? Love the double meaning which added to the story.)  It seems that all the teens have known one another all their lives. Making friends is difficult. And yet, Albert finds Lily attractive, and she responds to his interest.

As the novel opens, Albert is on the run with Olivia, whom, we discover, is Lily’s younger, cynical sister. Albert had snuck into Lily’s bedroom and spent the night with her. She disappeared. Now the police and Lily’s parents are looking for her. Albert is the prime suspect, having seen her last. While Albert’s parents believe that he couldn’t have been involved in harming Lily, they think she has been nothing but trouble for him and have grounded him. Only Olivia believes that together she and Albert can find Lily before there’s another accident. Albert, usually one to fly under the radar, decides to take the risk for the girl he loves.

High school housekeeping: The Last Good Place of Lily Odilon is a great book for a suspense-filled journey in search of a missing girl. The story has a lot of reluctant-reader appeal with its suspense, its subject at the heart of the problem, and its satisfying conclusion. However, there are three storylines running at once, so someone who is a struggling reader might not follow the action. For the average reader, the three lines add interest and background knowledge, creating more suspense in the search. The reader learns about the relationship between Albert and Lily; what happened in the few days before Lily disappeared; and what happens on Albert and Olivia’s search (on foot, no less!) for Lily. Good pacing and lots of opportunities to root for the heroes. Give it a read!

I'm a high school librarian, formerly an English teacher. I love to read and my mission is to connect people with the right books. To that end, I read widely--from the hi-lo for reluctant high school readers to the literary adult novel for the bibliophile.
View all posts by Victoria Waddle →
This entry was posted in Adventure Stories, Family Problems, Fiction, Horror/Mystery/Suspense, Romance, Young Adult Literature and tagged book reviews, child abuse, child sexual abuse, family problems, high school students, parent-teen relationships, romance, Teen Issues, YA fiction, YA literature. Bookmark the permalink.