“Not a Drop to Drink”

Not a Drop to Drink by Mindy McGinnis 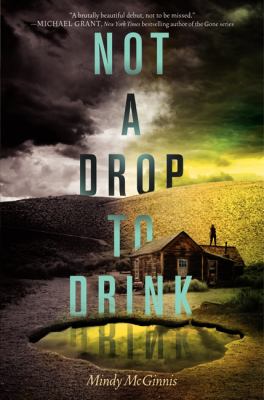 “Lynn was nine the first time she killed to defend the pond.”

Those are the first words of Not a Drop to Drink, and they start you on a reading session you won’t want to stop until the last page.

Lynn’s mother is a better shot than Lynn is, and, from the roof, can pick off intruders who hope to take over the farmhouse, and more importantly, its pond. Lynn must learn what her mother knows, has been learning it from childhood, and is desiring to do some of the difficult work of survival by herself. Intruders aren’t the only problem for the pair. There is the undependable weather, the lack of medicines, the roving coyotes that are far too brazen, fearless about attacking human beings.

It’s the lack of available water in the world that makes Lynn and her mother’s pond so precious. Because it’s their lifeline, they can’t share. And because they are always on guard against intruders, they are pretty much alone is the world, except for one neighbor, Stebbs, whom Mother just refers to as “asshole.” He has a secret source of water, and a friendlier attitude than Lynn’s mom, but she loathes him for reasons Lynn can’t understand.

Still there are moments of happiness in this life, particularly when winter sets in with blizzards. Then it is impossible for intruders to find the farm. Lynn and her mother can rest, can read the great classic poems and warm themselves by the fire.

It is in such a winter that Lynn has seen danger to the South, a group of men forming, who have tried to take over the pond and will certainly try again. But just as she relaxes her guard, noting that there has been no smoke from their encampment in weeks, she believes that another danger is out by the river. And yet what she finds there finally breaks her heart open to empathy, to a sense of fellowship that her mother never taught her, and of which she probably wouldn’t approve. Will it save or destroy Lynn?

High school housekeeping: Not a Drop to Drink is a wonderful YA dystopia about a future in the rural U.S. (Lynn is in Ohio). It’s based on the very real possibility that we will run short on potable water and that people will fight to the death for it. I’m in California and found this timely as the governor has just required citizens to cut their water use by 25%.

McGinnis’s writing is great. Her characters come alive and as Lynn is forced by circumstances to deal with people other than her mom, she gains in insight and empathy. There’s the requisite romance, but it has depth and concerns that you don’t often find in teen love stories.  On the whole, everything about this novel is plain good stuff. There was only one thing that bothered me, and it was so minor that I’m not sure why it kept running through my head. Lynn quotes a famous poem as having the line “not a drop to drink.” The famous poem “The Rime of the Ancient Mariner” has a line “nor any drop to drink.” I kept wanting that to be fixed. But other than that tiny issue, I was in love with the book and look forward to more from the author. All teens should enjoy this one.

I'm a high school librarian, formerly an English teacher. I love to read and my mission is to connect people with the right books. To that end, I read widely--from the hi-lo for reluctant high school readers to the literary adult novel for the bibliophile.
View all posts by Victoria Waddle →
This entry was posted in Uncategorized and tagged book reviews, child-parent relationships, coming of age, death and dying, drought, farms, future dystopia, Mindy McGinnis, murder, Not a Drop to Drink, Ohio, parent-teen relationships, ponds, poverty, rape, romance, water, YA fiction, YA literature. Bookmark the permalink.

2 Responses to “Not a Drop to Drink”