A Curious Mind: the Secret to a Bigger Life by Brian Grazer and Charles 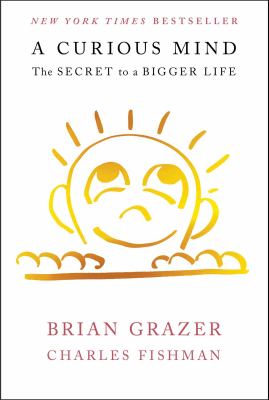 Brian Grazer is the producer of many well-known films (A Beautiful Mind, Apollo 13, Grinch, Splash) and  some TV series (24 is the best known). He’s always been a very curious person and here he argues the value of a curious mind–showing the reader that it can lead to personal and financial success as it has for him, but that it will, more certainly, lead to self-fulfillment.

Grazer met his Imagine Entertainment movie partner, director Ron Howard, simply by having the chutzpah to ask him if he would be willing to talk to Grazer for an hour or so. In fact, this is how Grazer makes all of his interesting connections. He has ‘curiosity conversations,’ a practice he began long before he was famous. He calls (or has his assistant call) people who are well-known in many walks of life–the entertainment industry, of course, but also in other arts, in science, and in business. He’s talked to outdoorsmen and high-ranking politicians. He asks for an hour of their time just to chat and ask some questions. Some of these people are readily willing. Others are harder to convince, but Grazer is tenacious. He will try for years until he gets a ‘yes’ answer.

Entertainers whom Grazer has talked to include Prince and Eminem. Scientists include Jonas Salk, the developer of the polio vaccine, which saved thousands of lives. Politicians include Condoleezza Rice, John McCain, and President Barack Obama (when Obama was the most junior senator in the U.S.), and even Fidel Castro. He also got to have dinner with Princess Diana, then the most famous and photographed person in the world.

These conversations have influenced Grazer’s work. In the case of Condoleezza Rice, it helped him decide that it was unsafe to make a movie about Mexican drug dealers in location in Mexico. When he meets Isaac Asimov, Grazer is unprepared and Asimov’s wife basically tells him to get lost, that he doesn’t even understand Asimov’s work. I’m not entirely sure how many people in the world could have understood the brilliant and prolific Asimov, but Grazer–who felt this like a slap in the face–learned never to go to a curiosity meeting unprepared again. The story that is most interesting is Grazer’s meeting with a victim of torture under the Pinochet regime. He was able to talk to her because Sting knew her, he knew Sting, and he was invited to Sting’s Malibu mansion for dinner.

Not all of these meetings turn out to be very interesting in the telling, but it is clear that they are important for Grazer’s creativity. When he needs to understand how the astronauts of the Apollo 13 mission would have felt trapped and facing death, he relies on his conversations with that Pinochet torture victim. (Truly, her story is the most interesting in the book, and by itself, worth the price of admission.)

Grazer discusses how the reader can make curiosity work for him or her. Since most of us, at least those of us at a certain age, have spent a life having the curiosity drilled out of us, this reminder of why it matters is very welcome.

High school housekeeping: A Curious Mind is a short, quick read that just about any teen could connect to. Although I’m not an entirely uncritical fan of the Common Core, it is better than the dozen years we spent with ‘No Child Left Behind,’ drilling curiosity out of students so that they could parrot answers and fill in bubbles on multiple choice standardized test. I hope this is the sort of book that the framers of the Common Core want you to read–indeed, I hope that as we have moved away from bubble-the-blank hell, curiosity will again take its rightful place in education.

After reading this book, you may want to start arranging your own curiosity conversations. Granted, you don’t know Sting and don’t stand a snowball’s chance in hell of being invited to his house. But there are many interesting people all around you, and most of them would love to talk to you about what they do and why it matters. And who knows–Grazer got to have some great conversations with people far more famous and, in the eyes of the world, far more important than he is–and all he did was ask and keep asking. That’s a skill we should all learn.

If you are interested in the workings of Hollywood and movie-making, that is just one more reason for you to read A Curious Mind.

I'm a high school librarian, formerly an English teacher. I love to read and my mission is to connect people with the right books. To that end, I read widely--from the hi-lo for reluctant high school readers to the literary adult novel for the bibliophile.
View all posts by Victoria Waddle →
This entry was posted in Biography/Memoir, Non-fiction and tagged 21st century learners, A Curious Mind, Adult books for teens, autobiography, biography, book reviews, Brian Grazer, Common Core, Common Core standards, creativity, critical thinking, curiosity, nonfiction. Bookmark the permalink.