Throwback Thursday: “Interview with the Vampire” 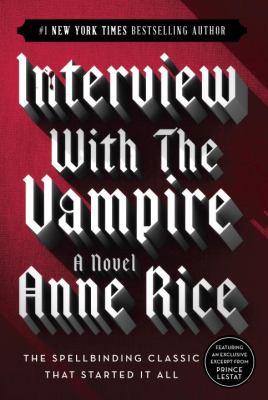 In an interview, the vampire Louis discusses his life from its beginning in New Orleans during the late 1700’s. he became a vampire at age twenty-five in 1791.

Louis has a brother who was very pious and came to have visions. Louis doesn’t believe that the visions are real and he will not follow the direction of his brother to sell his plantation and give the money to his brother. Subsequently, his brother falls from the top of a staircase and dies from a broken neck. Louis always feels guilty about this, about his inability to believe that his own brother could be a saint. In psychic pain, Louis doesn’t want to remain on the plantation and  has someone else run it for him. he is attacked by the vampire Lestat and left for dead. When Lestat comes back, he makes Louis a vampire because he wants the plantation, Pointe du Lac, for himself.

Louis is left to figure out how to be a vampire. His first kill is gruesome, and with no help or information from Lestat, he doesn’t know that he could have killed animals instead. He feels that he must stay with Lestat to learn the secrets of the vampire life, and Lestat encourages this need. Louis eventually learns a few things about surviving on animals, sleeping in coffins, and that a stake through the heart doesn’t kill a vampire.

Life gets creepy at Pointe du Lac, with the slaves figuring out that Louis and Lestat are vampires. Bad goes to worse and after the slaves rebel and Louis torches the house, the two vampires are on the run.

The story of meeting and making other vampires is under way. There are vampires who are like mindless zombies, mere killers. Even thoughtful vampires can be wary of Louis–he has too many human emotions and qualities; he feels for mortals and their troubles. Louis is desperate to get out from under the influence of Lestat and with help, attempts to kill him. Yes, in Rice’s world, vampires can die. In fact this is a critical idea–that vampires die if they don’t have the “stamina for immortality,” if they want “the forms of their lives to be fixed.”  They have to learn to live in the present, something I find to be a nice little irony. They must recreate themselves through the centuries, in a constantly changing but continually sexy, violent and creepy world.

High school housekeeping: You are young enough that an older vampire book is Twilight. But with Interview with the Vampire, Anne Rice began the new era of vampire tales. If you haven’t heard of or tried her work, I recommend that you do. While Louis is more humane than your average vampire, Rice’s books are not really the same genre as the Twilight and its spin offs, despite the fact that reviewers sometimes refer to her work as the first paranormal romances. This isn’t simply an ‘I’m in love with an undead boy’ book. And unlike teen paranormal romance heroes, Rice’s Louis tries to show that being undead isn’t such a hot ticket.

Interview with the Vampire is an adult book with mature themes. It’s a great choice for a novel that you won’t be able to put down, but that will push you to a higher reading level as you meet many characters and cross continents. I’m thinking of it now because Halloween is tomorrow, but also because Rice, after eleven years of not publishing, has just come out with a new book about that great evil vampire, Lestat. It’s Prince Lestat. I imagine it will be on the bestseller list for a while. If you get hooked on Anne Rice’s vampires, go through the series–you’ll have many engaging books to read.

I'm a high school librarian, formerly an English teacher. I love to read and my mission is to connect people with the right books. To that end, I read widely--from the hi-lo for reluctant high school readers to the literary adult novel for the bibliophile.
View all posts by Victoria Waddle →
This entry was posted in Family Problems, Fiction, Historical Fiction/Historical Element, Horror/Mystery/Suspense, Mature Readers, Supernatural and tagged Adult books for teens, Anne Rice, book reviews, Interview with the Vampire, supernatural, Throwback Thursday, undead, vampires. Bookmark the permalink.