Posted on October 2, 2014 by Victoria Waddle 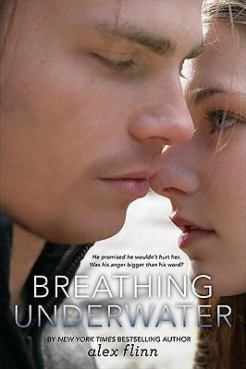 Nick is in court, facing a restraining order. He tells the judge that he never hit his girlfriend, Caitlin. The judge isn’t buying it. And it’s a good thing, too, because in the journal that he is required to keep as a part of his rehabilitation, he tells the reader that he did hit her—but only once and just a slap.

But as Nick not only keeps the journal but also goes through court-ordered therapy (anger management) with other men and youths who abuse their wives/girlfriends, we very slowly learn the truth about Nick’s relationship with Caitlin.

Nick is weirdly controlling. He has excuses—his mother deserting him and leaving him with his abusive father. The mind games his father plays and the punches he throws. But as Mario, his counselor tells him, these aren’t reasons for abusing someone else, and Nick is going to have to learn to control himself if he is to become a real man.

High school housekeeping: I’m not the only one who thinks Breathing Underwater still deserves to be read. Ten years after it was first published, it was reissued. There are many reasons why you should give this book a read: it’s realistic, and while we sympathize with Nick’s problems, it is always clear that his behavior is unacceptable. We really worry about Caitlin, whose low self-esteem and negative body image are part of the reason she allows Nick to control her and to believe it’s love. Now that she’s lost weight, Nick is always reminding Caitlin that she could gain it back and that no other guy would find her appealing.

Breathing Underwater is a quick, easy read. The Lexile level is 510 (about 4th grade), so it’s a great choice for teens working on their reading skills. (Note: All of the subject matter is mature, so this is not for your elementary school siblings.) It also has some interesting reflections on friendship, honesty, and the need to have a lifeline—to be able to come up for air.