The Miseducation of Cameron Post by Emily M. Danforth 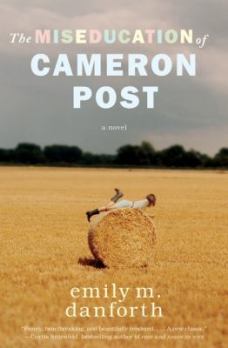 Cameron Post and Irene Klauson have always been best friends. They do everything together including all those things they shouldn’t do, like shoplift. And there’s always been an edge to their relationship because they compete with one another. So when they are twelve years old and they decide to practice kissing, there’s nothing particularly strange about that. But what they both discover is that they like their kisses and want more. Cameron Post is realizing that she is a lesbian, and it seems that Irene is too. They are already thinking about being careful, keeping it a secret, and looking for an opportunity to do it again.

The night following their discovery, Cameron is staying at Irene’s house. Irene’s father wakes her up in the middle of the night and tells her that he has to take her home. Have the girls been discovered? They are so worried. But, unfortunately, the news is much worse than that. Cam’s parents have been killed in a car accident at Quake Lake in Montana. Ironically, this very lake was created in an earthquake decades before, and Cam’s mom had just coincidentally escaped it.

Cameron’s life is pulled apart. Although she still has her much-beloved, oddball grandmother (mother of her father) to help take care of her, her mother’s sister, a recently reborn Christian, gives up her own life to take care of Cam. And worst of all is the thought that keeps running through Cam’s head—she’s glad that her parents will never know about her kiss with Irene. And she believes that the kiss itself may have been the cause of her parents’ death—a punishment. And so the guilt begins.

As Cameron grows into her teen life, she also grows more distant from Irene, who has become wealthy and leaves for private school. She hangs out with mostly guys, who dare one another to do dangerous things and spend a lot of time smoking dope. She now has Lindsey, a girl from Seattle, that she competes against in swimming. Lindsey is openly gay and much more knowledgeable than Cam. She makes Cam feel the stultifying nature of her life in eastern Montana and in the Gates of Praise church (which is always shortened to the acronym GOP—and, yes, I was amused). At GOP, Cam often hears sermons against homosexuality. She’s surprised one day when she hears her aunt having sex with her boyfriend—after all, that’s one of the sins on the GOP list. Why are the standards for the two different?

With Cam exploring and working out her sexuality, you can pretty much figure she’s going to get caught. Her downfall is a beautiful girl of her dreams, the super popular Coley, who is also a member of the GOP church. A girl with a boyfriend, one who is either secretly bisexual or at least is exploring. When the two are caught, Coley hurls all of the blame on Cameron; her betrayal, as we see it later, is breathtaking.

Once caught, Cam’s life is again turned upside down. She is sent away to God’s Promise, a conversion therapy school/camp. Up to this point, the novel has been very good. But at God’s Promise, it soars. There Cam has no privileges until she earns them. She has to deal with her roommate ‘Viking Erin,’ who wants her conversion to work. But she also makes a few great friends and still manages to get up to no good.

Guilt is a major theme of this novel, beginning with that first kiss between twelve-year olds. The big question that hangs over all the ‘disciples’ (students) at God’s promise is whether their conversation therapy will work. There’s no evidence that it does and the psychic price that the students pay is high—even tragic in some cases.

High school housekeeping: The Miseducation of Cameron Post is a literary-quality novel. The characters are well drawn—no stick figures here, including Cam’s Aunt Ruth who does love her, feels that Cam’s ‘problem’ may be as much her fault as it is Cam’s, and who truly believes that she is helping Cam by sending her to God’s Promise.

I did worry a bit reading the book because Cam is such a pothead and has several other bad traits to boot. Obviously, I’m not someone to promote drug use, but I think that with all the issues in Cam’s life, her behavior is pretty realistic. The intimate and sexual scene are well done. They aren’t gratuitous nor are they pornographic. Nevertheless, this is a book for mature readers, and I think high school rather than younger YA readers are the audience.