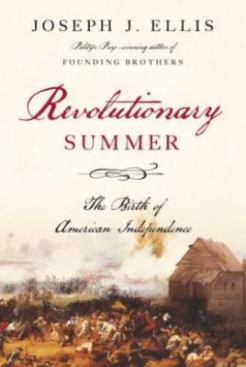 The summer of 1776 is the revolutionary summer that Ellis discusses in his book, one in which the fate of the war for independence looked pretty bleak.

Ellis says of Washington’s ragtag army, ‘They were not the kind of men you wanted living in your neighborhood.’ (They spit tobacco every few feet, mocked their officers, were undisciplined and unable to hold their ground in a fight. Ironically, the fact that so many of them turned and ran in the first battles in New York that summer gave Washington the chance to reorganize without the massive losses he would otherwise have had.)

New York was strategically significant in 1776, in part because of the Hudson River. So it was an obvious place for an early clash between the British and the states. And it proved particularly difficult for Washington and his rebel army. New York was full of loyalists who didn’t want to be defended against the British. As the British landed, many New Yorkers hailed them as saviors. Washington was in a no-win situation; his retreat from it was nearly miraculous.

How did these newly Unites States ever pull off a win in the Revolutionary War? As Ellis tells it, they learned that they just had to keep from losing and the British would succumb because they were fighting from too far away with too little direction. He also details the story of the Howe brothers—Admiral Lord Richard Howe and the younger General William Howe, who commanded the British due to his proven military brilliance as a regimental commander and his notable courage. These men, while well-positioned to win this war, saw themselves as peacemakers and diplomats. This is not so odd as it seems—you’ll understand why as you read—but this view deeply hurt their strategy in the end. They really weren’t winning hearts and minds. (Hum . . .)

Still—things did have to change for the Continental Army if they were going to win battles. The new country had to invent and standardize the rules of the army, and admit that having ‘turnstile’ soldiers, who left after a year of service couldn’t work. Just as the men were finally learning what it meant to fight a battle, they were heading back home. And yet to have a standing army was something that the colonies had always objected to—it smacked of the imperial government they were trying to throw off.

While the action around New York was coming to a head, the United States not only had to standardize their army. They had to declare their independence. The story of how Thomas Jefferson was chosen to write the document is genuine fun. (Ben Franklin, the rock star of the period, couldn’t stand writing by committee and didn’t want to create a document that would be edited by others later.) At the time, Jefferson’s first two paragraphs were regarded as a “rhetorical overture, the flamboyant windup before the real pitch.” As we know now, “We hold these truths to be self-evident,” etc. are some of history’s most famous and most important words.

Because of Ellis’s fluid writing style, the summer of 1776 comes alive for the reader. In addition to Washington’s early lack of resolve (later eliminated), the unimaginable success of the Continental Army’s retreat from New York and then the burning of that city, we see: Jefferson writing the Declaration of Independence; John Adams coming to realize the significance of what he is involved in; John Adams’s relationship to his wife Abigail and the significance of their letters to each other; the importance of Benjamin Franklin and how his opinion of American independence evolved.

High school housekeeping: Some reviewers note that the topic of Revolutionary Summer has been written about ad nauseum. And yet, for those of us who know little about the details of this historic moment, Ellis is the perfect choice. In addition to his excellent writing, the high school student will love him for his brevity—not including the endnotes and index, this book is well under 200 pages. (And yet, including those, it is over that magic 200 page marker that many teachers require. 😉 ) There are also some helpful color illustrations and black and white maps. I highly recommend this book to you. If you want to read about the entire year, David McCullough’s 1776, which is a sort of anthem to George Washington, is also an excellent book.

I'm a high school librarian, formerly an English teacher. I love to read and my mission is to connect people with the right books. To that end, I read widely--from the hi-lo for reluctant high school readers to the literary adult novel for the bibliophile.
View all posts by Victoria Waddle →
This entry was posted in Historical Fiction/Historical Element, Non-fiction and tagged 1776, Abigail Adams, American History, American Revolution, Benjamin Franklin, Declaration of Independence, George Washington, history, John Adams, New York, Revolutionary Summer, Revolutionary War, Thomas Jefferson, US History. Bookmark the permalink.