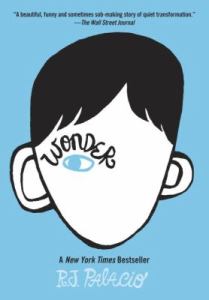 Augustine—Auggie—Pullman has been homeschooled all his life, but for fifth grade, he is going to go to a private middle school. He’s smart enough, but he’s anxious. This will be the first time he’s had to deal with the push and pull of the middle school society. And he’s right to worry. Due to an extremely rare genetic disorder, Auggie has severe facial deformities. He knows people will make fun of him, and that it won’t be easy.

Auggie tells the reader that whatever s/he imagines that his face looks like, it is worse. He has no ears—no outer ears, so none that show. His eyes are too far down, in the vertical middle of his face. Everything about his face is misshapen, and though he’s had nearly 30 surgeries, his face is still a shock to those who see him for the first time.

For a kid with so much going against him, Auggie is pretty centered. He has parents and a sister who really love him. And the principal at his new school has selected good students, ‘good kids,’ to show him around before the school year starts, to be nice to him.

That some of these students put on a face of kindness in front of the adults at school and then bully him behind his back shouldn’t be a surprise. That one of them can get almost the entire school to turn against Auggie isn’t a surprise either. What is a surprise is how the author catches the nuance of this bullying—from kids who are truly mean to those who just don’t know what to do and are having a crisis of conscience.

In fact, Palacio catches pretty much everything about middle school that illuminates what a difficult time of transition into adolescence it can be.

One of the things I really liked about Wonder is that it isn’t peopled by saints/heroes and demons/villains. Auggie’s older sister is tired of being thought of as the girl with the deformed brother (who takes up most of her parents’ energy through no fault of his own). Still, she is fiercely devoted to Auggie. And even good people really are taken aback at Auggie’s appearance. But while the novel accepts that this is normal, it also reminds us that after a week or two, people get used to the unusual features of Auggie’s face and then forget about them. He just becomes Auggie, a kid, a schoolmate.

I’m always a sucker for good writing, and Wonder has got it. Palacio captures the kids—their conversations and interactions—realistically.

While Wonder is a children’s book, with a target audience that is Auggie’s age, give or take a few years, it’s a quick read that even adults will enjoy. I highly recommend it to all.

High school housekeeping: Another thing that I love about this book is that, since anyone of any age can enjoy it, it’s a great read for high school students working on their reading skills. This isn’t true of most middle school books—they just don’t interest high schoolers. And because teens like edgier stuff, books written for high school students who are reading below grade level usually deal with issues of teen pregnancy, drugs, gangs, etc. There’s nothing wrong with that, and there are many of those books I recommend. But Wonder is another option—an opportunity to become immersed in beautiful writing, in Auggie’s emotional responses to his classmates as well as the feelings of everyone who comes in contact with him. It’s an opportunity to see how perceptions can and do change, how everything in the world isn’t black and white. And that’s great for anyone, struggling reader or not.

I'm a high school librarian, formerly an English teacher. I love to read and my mission is to connect people with the right books. To that end, I read widely--from the hi-lo for reluctant high school readers to the literary adult novel for the bibliophile.
View all posts by Victoria Waddle →
This entry was posted in Family Problems, Fiction, Hi-Low/Quick Read, Read 180, Young Adult Literature and tagged book reviews, bullying, children's fiction, children's literature, genetic deformities, genetic disorders, hi-low reading, high school students, middle school, YA fiction, YA literature. Bookmark the permalink.