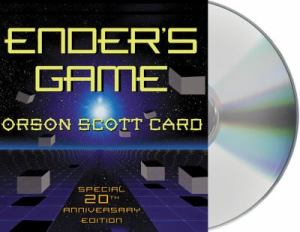 Ender Wiggins is a rare genius who may save the world from alien ‘buggers’ if he can prove himself in Battle School, and rise to the top command post. Of course, he’s only six years old.

Ender has battles on many fronts at school. Not only is he the youngest student to ever be admitted to Battle School, the fact that he’s also the most successful—quickly rising in rank—makes him the target of envy, resentment, and bullying. He would be a lonesome child anyway because no one thinks quite as well as he does. But Ender must overcome the social hurdles stacked against him if he is to make a few friends and have others willing to be led by him into battle. Rather than help him, the adults who run the Battle School (military men in high command) continue to set him up for tormenting by older boys and for impossible battles in the battle room. While they sometimes question the ethics of their treatment of Ender, they believe it’s necessary to test his mettle in the harshest ways possible.

These military rulers believe that Ender might have the right stuff because he was bred to have it. He’s a ‘third’ in a world where families are only allowed to have two children. Ender’s older brother and sister, Peter and Valentine, are also brilliant, but don’t have the right personality traits to be the commander of an epic interplanetary battle. Peter is sadistically violent, torturing small animals and Ender as well. Val is too feeling. In Ender, the military hopes to get it just right.

The author of Ender’s Game, Orson Scott Card, won both the Hugo and Nebula Awards for the novel. I’m not a fan of hard-core science fiction and for me, the Nebula Award signaled a book that, while fabulous, wouldn’t suit my taste. I was wrong on that account—Ender’s Game is quite character driven. Much of it is an exploration of Ender’s thoughts as he works through battles and social challenges. He, too, questions his own actions, especially concerning his violence toward bullies. (He reasons that if he doesn’t destroy them in a single showdown, they will brutalize him continually. Think of Ralph in Lord of the Flies if he had decided it was necessary to take Jack down instead of trying to reason with him.)

While we get lots of Ender’s thoughts, we get lots of battle action and mounting tension among the characters as well. This is a fun, fast-paced story that I recommend for anyone.

High school housekeeping: The reason I decided I needed to try Ender’s Game is that the movie is coming out next week (November 1). I was busy and decided to listen to the twentieth anniversary edition audiobook. I’m really glad I did, and I’m recommending this to you as well. At the end of the novel, Card says in an interview that he wishes all of his novels had been published in audio format. He began his career as a playwright, and he values the production of a full cast. The audiobook has many narrators and they do a great job.

This is another book that can be compared to a required classic if a teacher gives you such an assignment. Obviously, you’d have no problem comparing and contrasting it to Lord of the Flies, but I think you’ll see connections to other required reading as well.

I'm a high school librarian, formerly an English teacher. I love to read and my mission is to connect people with the right books. To that end, I read widely--from the hi-lo for reluctant high school readers to the literary adult novel for the bibliophile.
View all posts by Victoria Waddle →
This entry was posted in Family Problems, Fiction, Human Rights Issues, Movie Tie-In, Over 375 pages, Sci-Fi/Futuristic, Young Adult Literature and tagged audiobooks, book reviews, Ender's Game, movie tie-in, science fiction, YA fiction, YA literature. Bookmark the permalink.