Bullying Books: “The Astonishing Adventures of Fanboy and Goth Girl” 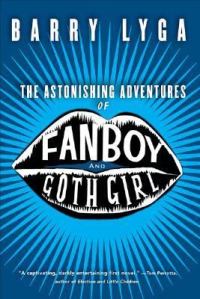 The Astonishing Adventures of Fanboy and Goth Girl by Barry Lyga

Fanboy puts up with the bullying he receives throughout his sophomore year of high school by hanging on to a few things he regards as good: his friend Cal—a popular jock, but also secretly a comic book fanatic; his late-night writing and illustrating of an original comic book which he hopes to have published; the knowledge that he’s the smartest kid in his school and can leave all his tormentors behind in two years; and a bullet he carries every day, one he uses as a sort of worry stone.

It seems that Fanboy will just continue his miserable existence with his pregnant and self-involved mom and his stepfather, whom he calls the ‘step-fascist.’ To ease his suffering, he keeps a list of all the people who have done him wrong and sometime fantasizes about school shootings in which they are hurt. But one day he receives an email from Kyra—Goth Girl—questioning why he puts up with the school bullying. She has images of him being repeatedly slugged in PE class while the teachers all stand in a corner and talk. Suddenly, Fanboy has a second friend, one he can claim in public.

But Kyra is one messed-up girl. She lies out of habit and has dark secrets. She is volatile and often irrational, getting into arguments with Fanboy that result in wildly inappropriate behaviors, cutting him off, and then reappearing in his life without explanation. Yet she understands Fanboy’s creative drive and his insights about the hollow experience of his education. She both helps and hinders Fanboy.

What Fanboy learns about coping and about standing up for himself against his tormentors makes The Astonishing Adventures of Fanboy and Goth Girl a worthwhile read. That said, I do worry that if you aren’t a comic book fan yourself, or at least someone who has seen several superhero movies (and there are so many that are popular right now), you might get lost in the discussion of comics and comic book creators. If you happen to be a comic book fan, I think you’ll love this novel and the richness of Fanboy’s obsession with his artistic pursuit. Goth Girl remains an enigma to the end. The novel doesn’t have the tidy closing that most YA novels do, and that might be a problem for some readers. But if you think about friendships and romances in real teen lives, you’ll find that Fanboy and Goth Girl is often spot on.

I'm a high school librarian, formerly an English teacher. I love to read and my mission is to connect people with the right books. To that end, I read widely--from the hi-lo for reluctant high school readers to the literary adult novel for the bibliophile.
View all posts by Victoria Waddle →
This entry was posted in Family Problems, Fiction, Romance, Young Adult Literature and tagged book reviews, bullying, comic books, YA fiction, YA literature. Bookmark the permalink.