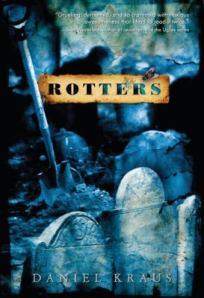 Such a weird story! The combination of bullying and horror story compelled me to finish the book, and I think it will appeal to anyone who likes really quirky stuff.

Joey Crouch has lived with his mother all of his life in Chicago. They don’t go out much and he’s never been over the Illinois state line. But when his mother is hit by a bus and killed, Joey is removed to a small town in Iowa to live with a father he’s never known.

Things are very bad from the start. Ken Harnett, Joey’s dad, doesn’t bother to pick him up at the depot. He immediately leaves the house upon Joey’s arrival and doesn’t return for three days. Meanwhile, Joey sleeps on the floor, has nothing to eat and notices a strange, nasty odor in the shack that he can’t identify.

Dressed poorly, hungry and stinking, Joey immediately becomes a target of bullying in his new high school—not only by jocks but by a sadistic biology teacher as well, one who daily makes Joey stand in front of the class and then uses him to point out body parts and their functions. (Just a note here from the teacher in me: I had a hard time believing that any teacher anywhere could get away with treating a student the way Joey was treated—but if one tried, I would hope that someone in the class would speak up and tell outsiders.)

The situation only gets worse when we discover what that terrific stink is: Ken is a modern-day grave robber. With nothing to lose at school, Joey decides to learn the trade, and we enter the bizarre brotherhood of this underworld. They are criminals with a strange code of honor, and the one of them who has broken the code is terrorizing all the others. He may have the power to use Joey to get at the whole group.

Rotters are people—because all people will die and then they will rot if they are not cremated. The descriptions of grave robbing, of disintegrating corpses, are the stuff of nightmares.  (So beware.) Yet the story is oddly original and well-written. There are a lot of interesting facts about the history of grave robbing and the ‘resurrection men’ who dug up corpses for scientists and professors to use in study. (Remember Jerry Cruncher in Charles Dickens’ A Tale of Two Cities?) When Joey has been bullied beyond endurance and he seeks revenge—well, imagine what a grave robber could do.

I'm a high school librarian, formerly an English teacher. I love to read and my mission is to connect people with the right books. To that end, I read widely--from the hi-lo for reluctant high school readers to the literary adult novel for the bibliophile.
View all posts by Victoria Waddle →
This entry was posted in Family Problems, Fiction, Horror/Mystery/Suspense, Over 375 pages, Young Adult Literature and tagged bullying, Chicago, grave robbers, horror, scary stories, small towns in fiction, YA fiction, YA literature. Bookmark the permalink.