Just a quick note on Death Sentence: Book Three of Escape from Furnace. 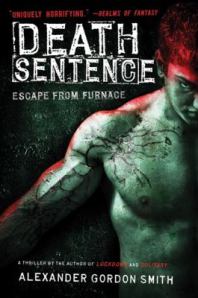 It still has the appeal of the first two books, but it does have that middle of the series lag, at least at the beginning of the book. It’s not so much that Smith is trying to go over what’s in the first two books–thankfully, he doesn’t fall into that trap. (Start at the beginning of the series if you want to know, right?) But he does begin with lots of gory details about Alex becoming a ‘Black Suit.’ The depth of this description will have appeal to many readers–it may hook some guys who don’t often choose, of their own free will, to read (teens whom libraries and schools call ‘reluctant readers’).

I’m not a reluctant reader, so I was getting agitated–where had the storyline gone off to? Whatever was going to happen in the novel was left to wander the desert for–what seemed to me–forty years, while I was bogged down in page after page of Alex’s surgeries, hallucinations, bloody towels and intravenous drips. To be fair, the hallucinations are later connected to the story. (It’s hard to understand how the ‘nectar’ that the warden is having pumped into Alex can make him see historical events while sedated, but there is an explanation, and it’s worth just rolling with it.)

The story does get moving along, and we reunite with Simon and Zee, have a great jailbreak scene, and more. So, if you enjoy the long descriptions of effluvia, stretched skin, painful procedures and an immoderate number of hallucinations, great. If not, it’s OK to give the first third of the book a cursory (quick, fast) read, skimming the pages. And then get down to the story.

I continue to recommend this series, particularly for ‘reluctant readers.’

I'm a high school librarian, formerly an English teacher. I love to read and my mission is to connect people with the right books. To that end, I read widely--from the hi-lo for reluctant high school readers to the literary adult novel for the bibliophile.
View all posts by Victoria Waddle →
This entry was posted in Fiction, Hi-Low/Quick Read, Read 180, Sci-Fi/Futuristic, Young Adult Literature and tagged Escape from Furnace series, YA fiction, YA literature. Bookmark the permalink.