Adult Books for Adults and Teens: “Team of Rivals” 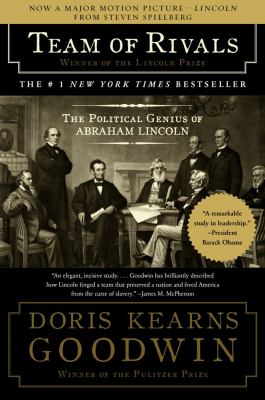 I know this is a long shot, but I’m hoping there’s a student

who will take me up on this.

Summer reading for the truly motivated!

While the focus of Team of Rivals is on Lincoln’s political acumen and on his relationship with his major political rivals turned advisers and friends, there is a lot of interesting discussion of their personal lives. This is a sort of group biography of the men who steered the country through the Civil War, and of the women who influenced them.

Many of the men discussed in Team of Rivals were prominent candidates for the Republican Party’s presidential nomination in 1860. Several of them were better known than Lincoln, particularly William Henry Seward. None of them thought Lincoln would secure the nomination. Yet it was their own rivalries that made Lincoln’s victory possible, as delegates who didn’t want a certain prominent candidate to be nominated would throw their votes to Lincoln.

I admit to knowing little about the Civil war period. This book was a thoroughly enjoyable way to learn about the lives of Abraham Lincoln and the men in his cabinet, of their relationships to family members, and in turn the influence those family members had on the direction of this country. Even more interesting—and instructive—was seeing how Lincoln was able to take all these rivals of his (and of one another) and pull them together in his cabinet—a team whose diverse opinions were crucial to Lincoln as he navigated one of the worst periods in U.S. history.

Once Lincoln had established his cabinet, William Seward, as secretary of state, thought that he would be running the country, with Lincoln as his puppet. But over time, he understood Lincoln’s political genius. The two became great friends. So, too with Edwin Stanton. Stanton had disrespected Lincoln when he was a lawyer working in Springfield, refusing to meet with or even talk to him after engaging him to work on a trial in Cincinnati, and calling him a ‘long-armed ape.’ Yet Lincoln later made Stanton his secretary of war. Stanton became a good friend and is the man who said, on Lincoln’s death, “Now he belongs to the ages.” In addition, the escaped slave, abolitionist and orator Frederick Douglass came to respect Lincoln after meeting him to discuss freeing slaves.

Unfortunately, Salmon Chase, Lincoln’s secretary of the treasury, could never put aside his jealousy of the president. Chase seemed to have no loyalties to friends and people who had helped his career (so it wasn’t just Lincoln), but he did stay loyal to anti-slavery platforms. His behavior appears to be wholly motivated from a desire to be the president—even at the expense of Lincoln’s policy and reputation. He always felt that he was more deserving of the presidency than Lincoln, and he let others know it. He was fond of submitting his resignation when he didn’t get what he wanted, but was surprised on the fifth submission that Lincoln accepted it. However, Lincoln later appointed Chase to be Chief Justice of the Supreme Court. According to Goodwin, Lincoln had a “singular ability to transcend personal vendetta, humiliation, or bitterness.” It is this as much as anything else that makes him a great man.

Another man who comes off poorly is General George McClellan, who couldn’t take action in leading Union troops into battle, yet blamed all his faults on others, and particularly on Lincoln’s leadership.

Deeply revealing of the political climate of the time is the role of the women in these men’s lives. I enjoyed Francis Seward’s abolitionist stance and the letters she wrote to her husband and friends about what brought her to the cause (the immorality of slavery, the pathetic situation of slaves that she saw as she traveled). Not all whites sympathetic to slaves held these same views. Many Northerners and Republicans (the party of Lincoln) held that slavery would naturally end as society became more urban and industrialized.

Kate Chase, daughter of Salmon Chase, was the beauty who was at the top of the social pecking order, the girl everyone wanted to admire or court. She was so popular that Mary Lincoln was sometimes jealous of her. And yet her marriage and subsequent life was tragic.

Mary Todd Lincoln sounds better in Team of Rivals than in the few sources I’ve read before. She appears to have suffered terrible migraine headaches, and this affected her responses in social situations. She does hold more grudges than Lincoln, but to be honest, just about anyone in the world does. (His ability to let go of past hurts is nearly superhuman.) Team of Rivals also discusses the over-the-top spending habits Mary is now so famous for. However, Goodwin also catalogs the necessary improvements she made in the White House, which had been left to fall apart. Mary wasn’t very good at controlling her image in the press—she did much good, such as regularly visiting hospitals to care for wounded Union soldiers. Her work went unnoticed while the wives of other Politicians were lauded for the same activities. And, of course, her grief over the loss of her children—eventually three of her four boys—had to be a major factor in her bouts of depression.

While this point may seem just a sidebar in the evaluation of the book, I think it’s valuable. The deep grief suffered by so many of these ‘major players’ on the national scene changed all of them, for better and for worse. Lincoln suffered the deaths of his mother, his much-loved sister, and two of his sons (another died after Lincoln was assassinated). Chase lost several wives and became dependent on his elder daughter to be his social coordinator. The Sewards lost a daughter. Others close to the Lincolns lost their sons and husbands in the war. That the death of young wives and children was so commonplace in the mid-nineteenth century is important to remember. People learned compassion or they learned to be unnecessarily mean.

Since Team of Rivals covers such an important period of the country’s history, it includes insights on many of the significant issues and legislation of the day, particularly legal wrangling over slavery—the Missouri Compromise, the Kansas Nebraska Act, the Dred Scott decision, the Emancipation Proclamation, the Thirteenth Amendment, and more. Some of the events are shocking. Abolitionist Senator Charles Sumner, while railing against the expansion of slavery, verbally attacked senators who supported it. Congressman Preston Brooks later physically attacked Sumner, feeling that he was defending his relative’s honor. The idea that one man could cane another, nearly to death, right on the Senate floor, boggles the mind. Interestingly, this beating rallied the anti-slavery forces in the country.

This is such a great book on every level—the political, social, historical and personal. Not only that, but it includes many of the funny stories Lincoln was always telling—full of folk wisdom and often making his adversaries see the value of his point. The only thing that will keep you from reading it is the length—over 900 pages. While about 150 pages are endnotes and indices, that still leaves 750 pages. Even students who are good readers and enjoy history may not be able to find the time for such reading, especially if they are memorizing thousands of facts for AP tests!

Would you be willing to read this one over the summer? You won’t be disappointed. During the school year, you might make a deal with teachers who require about 200 pages of outside reading per quarter. Ask them if you can use Team of Rivals for biography as well as other nonfiction, and then as a free choice. That will cover at least 600 pages. I think any teacher would love the idea that you’d choose to read this book and enrich your education. By the time you get to Lincoln’s death, you will be so moved by his story that you’ll be hoping it won’t happen, even though you know it’s a historical fact. You can’t ask for more from a work of nonfiction.