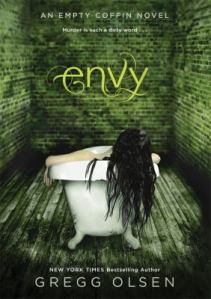 Katelyn Berkley dies in a freak accident. She is electrocuted in the bathtub when her expresso machine either falls into the water or when she threw it in. Or when someone else threw it in.

Katelyn is a ‘cutter’ whose many serious problems included an alcoholic mother. So is her death a suicide or an accident? Or maybe even murder?

Port Gamble is Katelyn’s home. It’s a seemingly perfect historic town in Washington with a lot of rules—the past has to be preserved—and a lot of secrets. It’s called “Empty Coffin” as a nod to an old tale about the mysterious disappearance of a body that was supposed to be buried at sea.

Katelyn’s death occurs just before the tenth anniversary of a horrific bus accident in which several Port Gamble children were killed. Thrown from the vehicle, Katelyn survived the bus accident only to later meet her bizarre fate in the bathtub. Two other girls, twins Hayley and Taylor Ryan, also survived the accident, but their survival was implausible. They had been plunged into a freezing river. They remained in comas for a month before waking. Now, no one talks about what happened.

While the truth about Katelyn’s death is surfacing, a nosey reporter is also uncovering some uncomfortable truths about the twins. Taylor and Hayley prove to be the snoops who take it upon themselves to investigate strange occurrences, to dig into the uncomfortable past. This seems natural for them. Their mother is a psychiatric nurse; their father is a writer of true crime books, a man who researches the lives of serial murderers; the girls themselves have a powerful paranormal connection and can visualize letters and words which they must deconstruct to get clues to the crimes.

Envy is the first in the Empty Coffin series. An important element of the book is based on a true cyber-bullying story. If you are one to follow big news stories, you’ll guess pretty quickly some of what happened to Katelyn—although knowing this news story won’t resolve the circumstances of her death, so you’ll still be in for some surprises.

Envy name drops many pop stars and current TV personalities, which may date the novel quickly. And some of the characters are one-dimensional. The twins are unrealistically sweet; opposite them is the super-witchy, egocentric Starla. She’s the school’s queen bee and cheerleading beauty, who had formerly been Katelyn’s BFF, but has dropped her for some reason. She’s the girl we’ll love to hate as the series moves forward. Still, the book is a lot of fun. It reminds me of the old TV series Murder, She Wrote because of the small town setting. But the twins have a lot more teen appeal than Jessica Fletcher. Maybe they are a super-updated version of Nancy Drew.

If you like quick murder mysteries with topical themes (like cyber-bullying or cyber-stalking), you’ll enjoy this who-done-it. If you are a fan of the Dead Is series, you’ll appreciate the paranormal element. A quick read for any teen.

I'm a high school librarian, formerly an English teacher. I love to read and my mission is to connect people with the right books. To that end, I read widely--from the hi-lo for reluctant high school readers to the literary adult novel for the bibliophile.
View all posts by Victoria Waddle →
This entry was posted in Family Problems, Fiction, Horror/Mystery/Suspense, Supernatural, Young Adult Literature and tagged dead is series, Empty Coffin series, Ontario Teen Book Fest, paranormal, Port Gamble, YA fiction, YA literature. Bookmark the permalink.