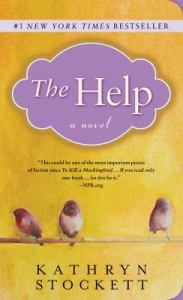 As I mentioned earlier, I read Worth Dying For because I wanted to try a Jack Reacher novel. If you read my post, you know I didn’t like it very much. As I was thinking the other day about good books for movie tie-ins, I was reminded of The Help by Kathryn Stockett. Since the movie was so popular—and award winning—you might have already seen it. This is a book that makes an easy transition to the screen. Whether you’ve seen the film or not, you’ll enjoy the read. If a teacher asks you to write a compare/contrast of a book made into a movie, The Help is a good choice.

Skeeter, Aibileen, and Minny are the protagonists who alternately tell their stories. It’s 1962 and the three women live in Jackson, Mississippi. Skeeter has just graduated from college (Ol’ Miss) and comes home to her parents’ farm. Her close friends quit college and got married. They have one or more children. But Skeeter’s a bit frustrated as a ‘new’ adult who is being told what to do by her mother. She wants to be a serious writer, and, as many people come to feel at this age, she is realizing that her values aren’t the same as those of her longtime friends.

Skeeter can see how her friends treat their help—the Black women who take care of their children, clean their houses and cook their meals. (Since the white women in this novel don’t work outside the home, and seem to do absolutely nothing in the home, I wasn’t surprised that they filled their lives with gossip and backstabbing. If life doesn’t have any drama, people are sure to create some!) Aibileen and Minny are the help. Aibileen is great with kids—she’s raised seventeen of them. She is slyly boosting the self-confidence of Mae Mobley, whose mother, Elizabeth (a friend of Skeeter’s), is pretty lousy with kids. Unfortunately, Aibileen’s own son died a few years earlier, and she is grieving. Minnie appears to be the opposite of Aibileen—she tells it like it is and has been fired more than once over her comments. She has five children of her own and a husband who is a drinker and wife abuser. She’s known as the best cook around.

The three women embark on a book project. They recruit other maids to tell their stories—to shed light on what it is like to work in white women’s homes and to care for children who will later treat them as inferiors. All the while, Skeeter is wondering what happened to Constantine, the Black woman who raised her, but disappeared just before Skeeter came home from college.

I’ve seen professional reviews of this book that say it will prick consciences. I don’t agree with that. I think that it’s a book that feels safe because the treatment of the maids is now considered heinous, and readers can be smug when comparing themselves to Hilly, Skeeter’s truly awful (and possibly one-dimensional) friend.

Still, outside of a few details that I couldn’t come to terms with—the issue of toilets on Hilly’s lawn was one (Skeeter wouldn’t have jeopardized those Black men’s very lives with such a stunt, and they would have been too afraid to participate anyway)—The Help is an achievement. We care deeply about the characters, we worry about the setbacks in each of their lives, and we are filled with anxiety over the suspense. In short, we are immersed in Jackson, Mississippi, 1962. We’re stunned by what is considered normal, by the way people treat one another. And glad for changes since then.

I'm a high school librarian, formerly an English teacher. I love to read and my mission is to connect people with the right books. To that end, I read widely--from the hi-lo for reluctant high school readers to the literary adult novel for the bibliophile.
View all posts by Victoria Waddle →
This entry was posted in Controversial Issue/Debate, Family Problems, Fiction, Historical Fiction/Historical Element, Human Rights Issues, Movie Tie-In, Multicultural, Over 375 pages and tagged books to film, civil rights, Civil Rights Movement, Jackson_Mississippi, literature, maids, oscars. Bookmark the permalink.