Posted on September 26, 2012 by Victoria Waddle

Drift: The Unmooring of American Military Power by Rachel Maddow 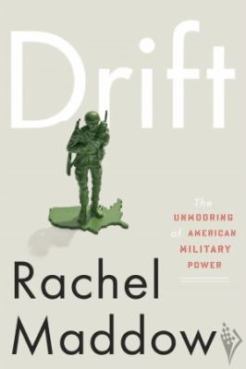 I have several teacher friends and family members who like to make fun of me for being a looney liberal. To avoid the teasing, I’ thought I’d read Drift but not review it as it is, after all, a book intended for an adult audience. But now that I have read it, I feel it’s a book that will engage teens, particularly those who have an interest in politics, in military careers (or even short-term military stints), or who have a concern with economics, the future of the country, government decisions and oversight, or human rights. So, actually—any teen who is engaged, who wants to make a difference in the world, should read this book.

Before she discusses how the United States has drifted into continual war (I’m not using the word ‘continuous,’ and there is a difference), Maddow quotes James Madison’s “Political Observations,” April 20, 1795:

Of all the enemies to public liberty, war is, perhaps, the most to be dreaded, because it comprises and develops the germ of every other. War is the parent of armies; from these proceed debts and taxes; and armies, and debts, and taxes are the known instruments for bringing the many under the domination of the few. In war, too, the discretionary power of the Executive is extended . . .

Next Maddow shows just how drifting to war since Vietnam has realized all of Madison’s fears.

Maddow begins with President Johnson and Vietnam and moves forward chronologically. She hits hard on the Iran-Contra Affair of the Reagan administration as a seismic shift in the way wars are conducted—without the approval of Congress, (and sometimes in secret, illegally). She focuses on the U.S. military actions in Bosnia under the Clinton administration as the time when privateers began to outnumber our armed forces  in military actions all over the globe. She then shows that under the George W. Bush and Obama administrations, “America’s spy service [the CIA] . . .[is] a new, out-of-uniform (and 100 percent deniable) branch of the military” engaged in drone warfare.

Post-Iran-Contra, more and more power to start and continue wars has accrued to the president. Part of the blame is to be laid at the feet of average Americans—us. We’ve been engaged in two of the country’s longest wars, simultaneously, and very few people care because only one percent of our population is out there doing the fighting, risking their lives. (If you are interested in what happens to those who are on the front lines and how our country is asking so much more than it ever has before from so few, check out the book War by Sebastian Junger.)

I think the most surprising part of Drift was the effect of privatizing noncombat jobs that support the troops. Since private industry is always touted as being more efficient than the government, it seems to make sense that the folks who house and feed the troops, the folks who repair the military equipment, should come from private industry. But Maddow shows that this plan has had horrific effects, the least of which is that it has been more inefficient and very expensive, with consistent and huge cost overruns. In Bosnia, DynCorp employees would commit fraud in billing the government. But they also engaged in sex trafficking—buying underage girls as sex slaves. If they were caught, they would simply be removed back to the States. The human rights violation is incredible. And this sort of thing puts our military personnel in harm’s way, as it causes people in other countries to hate Americans. (Think about it—how would people here feel about folks from another country who came over and then kidnapped and raped girls? What if that was all you knew about the people from that foreign country? Would you be happy that they were here?) That one percent of our countrymen and women who are volunteering for military service deserve better than to be sabotaged by lazy, morally vacuous privateers.

While there are certainly many places in Drift where you can almost hear Maddow’s signature delivery of a zinger, she has done her research and is able to back up what she says. Her endnotes are annotated, and for the true lover of politics, she gives many ideas for follow up.

To my friends who think that Rachel Maddow is an over-the-top foaming liberal, allow me to point out that in the process of doing that research mentioned above, she included several conservative thinkers who back her points. (OK, some backed her points earlier in their careers, like Newt Gingrich, and then changed their minds when the political winds shifted.) In the text, she provides evidence and opinions from both sides of the aisle. This concise work is a job well done.