Posted on February 9, 2012 by Victoria Waddle 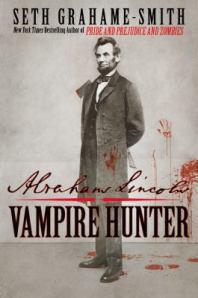 What do we make of the long-secret journal of Abraham Lincoln in which he details his life as a vampire hunter? What drove him to his vigilance against the undead? And why is his fight so important?

I read Abraham Lincoln: Vampire Hunter when it was published in 2010, but somehow I missed reviewing it. Now, it’s coming out in a movie, and today a student asked if we have it in the library. (Answer: COHS, yes. CHS—coming soon.) So let me step back and remember why I enjoyed this wacky mix of history and the supernatural.

Though it’s obvious that some of the journal quoted in the novel is pure fiction—the vampire parts—I want to mention for students that the entire journal is fiction, though some of the events described are historical. Lincoln’s mother did die when he was a boy, though we have no child’s journal describing his pain and grief.

In Grahame-Smith’s novel, we learn the secret behind the ‘milk sickness’ that killed Abe’s mom. It’s actually a vampire bite, as is all milk sickness. So—at a mere eleven years old—Abe takes a lifelong vow to kill any and all vampires he can hunt down. This personal pledge becomes an issue of national honor as Lincoln is slowing uncovering the connection between slaveholders and vampires.

Believable? No. A good piece of writing? No. Enjoyable? You bet. Unless you’re squeamish—there are many (gratuitous?) vampire battles and the methods of killing them (or of being killed, if you are an unlucky or unskilled vampire hunter) are legion. I’m guessing the movie is going to be a pretty bloody event. But if you aren’t taking it seriously, if you just like the mashup element of the book, you find it a very quick read that taps into your love of the perfectly ludicrous.

I'm a high school librarian, formerly an English teacher. I love to read and my mission is to connect people with the right books. To that end, I read widely--from the hi-lo for reluctant high school readers to the literary adult novel for the bibliophile.
View all posts by Victoria Waddle →
This entry was posted in Adventure Stories, Fiction, Historical Fiction/Historical Element, Movie Tie-In, Supernatural and tagged vampires. Bookmark the permalink.