Posted on November 1, 2011 by Victoria Waddle 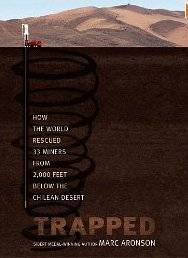 Trapped: How the World Rescued 33 Miners from 2,000 Feet below the Chilean Desert by Marc Aronson

You’ve heard about the Chilean (and one Bolivian) miners trapped 2,300 feet underground from August 5 until October 13, 2010–more than two months–after 708,000 tons of rock sealed them in complete darkness. But what do you know about how the rescue played out?

I thought I knew this story from the news reports, but Trapped showed me how little I really knew. It moves back and forth between what happened above ground and what happening underground for that two months.

The lives of the men show their real heroism: how they decided they would not resort to cannibalism (they were slowly starving before above-ground contact was made); how they worked and found leaders. Meanwhile, they could hear drills and knew that people were trying to find them, but the maps of the mine were so bad and so far off from reality that rescuers were hitting the wrong places. With each failed attempt, the men had to keep themselves from despair.

The many problems above ground—drills that worked too slowly and that broke against metal underground, wildly inaccurate maps of the mine shafts—show us why it took folks from all over the world to save the men. The stories of NASA scientists, Center Rock (a drilling company), the ‘paloma (dove) shafts, just wide enough to carry food and necessities and working around the clock—all the details—will give you faith in humankind. Knowing what happened affirms the resilience of the human spirit.

This is also a cautionary tale, as noted in the afterword. Though the miners lived because they behaved so well in the first 17 days when they had no contact from above ground and were rescued with the benefit of great technology, a big reason they were trapped is because the San Jose Mine, where they were working, had no escape routes. Mining is always very dangerous, but the mines are required to have two escape routes. In addition, the mine owners never updated their maps of the mine shafts, making rescue very difficult, ‘a shot in the dark.’ The author cautions us to also be people who ‘behave well,’ just as the miners did—and that means valuing miners and being alert to companies that have good mining practices.

This easy reading, tiny book—a little over a hundred pages—has lots of bonus material: diagrams, charts, color photos, a glossary, a timeline, and useful websites. In addition, the couple of pages on “How I wrote this book” discuss “What I learned that could be useful for students writing research reports.” It’s both powerful and succinct. I recommend this book to all our teachers and students, including those who are working on their reading skills. Check it out!

I'm a high school librarian, formerly an English teacher. I love to read and my mission is to connect people with the right books. To that end, I read widely--from the hi-lo for reluctant high school readers to the literary adult novel for the bibliophile.
View all posts by Victoria Waddle →
This entry was posted in Adventure Stories, Hi-Low/Quick Read, Non-fiction, Young Adult Literature and tagged Chilean desert, marc aronson, miners, mining. Bookmark the permalink.