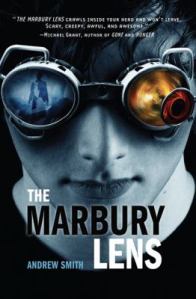 The Marbury Lens by Andrew Smith

Wow—this is the creepiest YA book I’ve ever read!

Before I get to the details, I do want to admit that it’s deeply flawed—because if you read it and then are disappointed in the fact that the Marbury world and Jack’s ‘real’ world don’t meld well, you won’t think, ‘Dang! Ms. W. will say anything to get us to read a book.’ So for the sake of honesty, I admit that I was mad when the book ended as it did—it felt like the author just couldn’t work out his vision, and so he quit. That said, perhaps he was saving the tie-up for a sequel as so many YA books these days are trilogies. The fact remains that I was riveted by the first chapters and had to finish the book ASAP. The fact remains that I think this is a book that guys who almost never read will be pulled into and have to finish.

The blurb that downloads with The Marbury Lens’ cataloging information is a good summary:

“After being kidnapped and barely escaping, sixteen-year-old Jack goes to London with his best friend Connor, where someone gives him a pair of glasses that send him to an alternate universe where war is raging, he is responsible for the survival of two younger boys, and Connor is trying to kill them all. ”

The alternate world is Marbury—it’s a brutal, post-apocalyptic universe where bands of monstrous people with one black eye and one white eye, dressed in nothing but codpieces (little garments to cover their genitals) made of human scalps and necklaces made of human teeth roam the desert and mountains, finding and killing ordinary humans, who are then eaten by hoards of large insects. Connor, Jack’s best friend in life, is one of these monsters in Marbury.

Over and over, Jack uses the lens, or glasses, that are an entrance to Marbury because he knows that in that world, he is responsible for the well being of two younger boys.

I am very interested in what students think of this book, but here’s an important caveat: It has a record attached that says it’s for 9 years and up. I think this is there because all YA books just get that designation automatically from the publisher. But some are for more mature readers, and I (yes, liberal reader that I am) would NOT recommend this book for anyone under 14 years. I do believe that teens can read about scary, terrible things because scary, terrible things happen in the real world, and it helps to know what they are. But in fairness to more conservative readers, I’ll add that I went online to see if I could find a review by a parent. I did find one from a woman who bought the book for her 15-year-old son, but read it first and thought it was totally inappropriate. So, keep that in mind.

Jack, who is drunk and passed out in a park, is kidnapped early on. His kidnapper is mentally ill and a sexual abuser. Clearly he has kidnapped (and very possibly killed) other kids. Clearly, he intends to kill Jack, but he wants to rape him first. Though he doesn’t succeed, the details of his efforts really aren’t for kids. Nor are the details of Marbury, which has reverted to a sort of Dark Ages, with violent hand-to-hand combat, heads cut off and nailed to walls through eye sockets—well, you get the idea.

Jack has redeeming qualities, including his needs to protect the two younger boys in Marbury. He’s actually a very nice guy in a horrific situation. I just needed there to be some explanation of how he got there, how the terror of his kidnapping was connected to Marbury.

I'm a high school librarian, formerly an English teacher. I love to read and my mission is to connect people with the right books. To that end, I read widely--from the hi-lo for reluctant high school readers to the literary adult novel for the bibliophile.
View all posts by Victoria Waddle →
This entry was posted in Controversial Issue/Debate, Fiction, Horror/Mystery/Suspense, Mature Readers, Sci-Fi/Futuristic, Young Adult Literature. Bookmark the permalink.

1 Response to “The Marbury Lens”