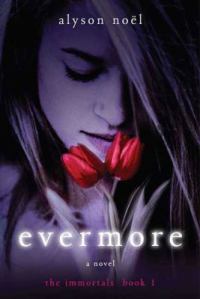 Alyson Noel is one of the five authors coming to Ontario on April 16 for the Teen Book Fest. She’s a New York Times best seller. She writes The Immortals series, and Evermore, is, of course, the first book. It’s pretty easy to find reviews, and I probably can’t add much in the way of a new perspective. So quickly—

The Immortals series is a great read for fans of the Twilight series. If you’ve read my past reviews, you know I’m not a Twilight fan. What this series—or at least Evermore, which I’ve read—has over Twilight is that the writing is better. And it’s not a vampire book. These immortals are different.

Ever is a seventeen-year-old girl living in Orange County, California. (Much of the description is of Laguna Beach and the area that surrounds it, as well as the activities that take place there such as the Sawdust Festival. However, Laguna Beach isn’t actually named.) Ever lives with her lawyer/wealthy/single/too-busy-to-pay-much-attention aunt because her family had a car accident back in Oregon which killed the rest of them—mom, dad, sister and dog, Buttercup.

Having survived the accident, Ever finds that she has special ESP-like powers. This really isn’t fun—and she becomes withdrawn and introverted, the important joy in her life being conversations with her dead sister. (And these are actually pretty fun—they argue as though both are still alive.) Luckily, the gorgeous new boy at school, Damen, has eyes for Ever although she hides under a hoodie every day. And there’s a reason for Damen’s attentions. Plus, in addition to his mysterious love and weirdly alternating attention/neglect, he performs magic often, by making red tulips appear for Ever.

The Immortals is classic gothic romance. If you’re a fan of the genre, you’ll love the series. Come on out to the Teen Book Fest April 16, 1-4 PM at the Ontario Senior Center on East B Street. Meet Alyson Noel and hear about her upcoming series Soul Seekers. You’ll have the chance to be photographed with the authors and have books signed. (You can buy copies there if you don’t already own them.)

I'm a high school librarian, formerly an English teacher. I love to read and my mission is to connect people with the right books. To that end, I read widely--from the hi-lo for reluctant high school readers to the literary adult novel for the bibliophile.
View all posts by Victoria Waddle →
This entry was posted in Fiction, Horror/Mystery/Suspense, Romance, Supernatural, Young Adult Literature. Bookmark the permalink.