Stieg Larsson Books: The Girl with the Dragon Tattoo, The Girl Who Played with Fire, and The Girl Who Kicked the Hornet’s Nest

Posted on January 4, 2011 by Victoria Waddle 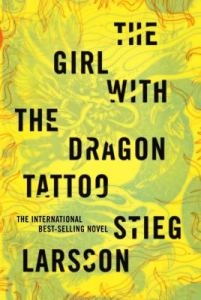 I enjoyed reading all three books in this series. What made me think of them today was something that may seem unconnected: I read an article stating that a new version of the classic The Adventures of Huckleberry Finn by Mark Twain is going to be published soon.

I don’t think of “The Girl” series as on the same level as Huck Finn, but I did think about why I haven’t recommended the three books to you even though I liked them all. They’re not YA books and they don’t fit with any of our library projects. They’re adult books and they contain some graphic violence, particularly against women. So I worry a bit about your maturity level, about whether your parents would mind if you read these uber-popular bestsellers.

The reason Huck Finn is no longer read much in schools is that some people find it offensive because the characters use the ‘n’ word. The new version is taking that word out in the hope that with this censoring, it will be allowed back in the schools. So I thought about whether a YA version of “The Girl” books would be popular with teens. But here’s what I came up with:

The book is available in the library in the regular adult fiction section.

The violence against the women is not glorified–it makes you hate the perpetrators and root for Lisbeth. I remember when I finished the first book, The Girl with the Dragon Tattoo, I thought that the book title should have been “Men Hurting Women.” Sure enough, I later read a review that said the title in the original Swedish was “Men Who Hate Women”(or something very close). And in a later book, the narrator even tells us that this is a story about men hating women, even more than it’s a spy story. I think the circumstances of the novel are sort of a cautionary tale–a safe opportunity for teen girls to see just how bad some men can behave toward them.

I let my own teens read it. I didn’t worry about them. They were not emotionally scarred or damaged.

There are  teens who don’t like some of the books teachers recommend, but they get hooked on The Girl with the Dragon Tattoo and then read through all three novels. Library folks call these types of novels ‘homerun books’ because they are the ones that get you into the reading game. You read them and then you move on to other books. And that is exactly what we want to happen.

So, if you’re mature and not easily scared, you could give these a try. In the first, an old uncle hires a journalist to help him find out what happened to his niece. The journalist seeks help from Lisbeth Salander, a brilliant computer hacker. And through the series, this becomes Lisbeth’s story, the damage done to her, her will to fight back and survive in bizarre circumstances that involve spies, intrigue, government cover ups and some incredibly loyal friends.

I'm a high school librarian, formerly an English teacher. I love to read and my mission is to connect people with the right books. To that end, I read widely--from the hi-lo for reluctant high school readers to the literary adult novel for the bibliophile.
View all posts by Victoria Waddle →
This entry was posted in Controversial Issue/Debate, Family Problems, Fiction, Horror/Mystery/Suspense, Human Rights Issues, Mature Readers, Movie Tie-In, Over 375 pages. Bookmark the permalink.