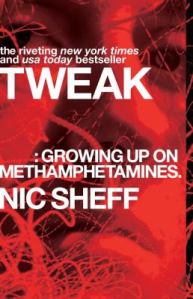 “It hurts so bad that I cannot save him, protect him, keep him out of harm’s way, shield him from

pain. What good are fathers if not for these things?” Thomas Lynch, “The Way We Are”

To say I was riveted from page one is not hyperbole. I wanted so badly for everything to get better, for Nic to wake up and see what his addiction was doing to his family, to him. But as a meth addict this wasn’t even possible for Nic. The research tells you why and Sheff explains it. It seems the best possible hope to stop meth addiction is never to start, not once. If this is hard for you to believe, if this just seems like the sort of fairy tale that teachers tell, YOU MUST READ THIS BOOK. And—if you are suffering because someone in your family is an addict—if a parent, brother or sister is lying, stealing your money, breaking into your house or your room, promising to do better but never acting on that promise—YOU MUST READ THIS BOOK. It will reinforce the “three C’s of Al-Anon” for you: you didn’t cause it, you can’t control it and you can’t cure it. One focus of this book is to help addicts’ family members to stop being ‘addicted to addiction’—to work on living their own lives.

Beautiful Boy is as much a story about relapse as it is about anything. As it opens, Nic returns from college very excited to see his family, his little brother and sister. But he’s relapsed into crystal meth addiction and life explodes. From here, we track back to look at the course of Nic’s addiction. David Sheff, as Nic’s father, will blame himself about so many things: his divorce from his first wife, his unconventional raising of Nic, the fact that he did drugs himself when he was young. Yet to the reader—who will acknowledge that Nic’s joint-custody life must be lousy because it requires him to jockey between the Bay Area (San Francisco) and Los Angeles—parts of Nic’s childhood seem ideal. He is allowed so much creativity; he lives with his father, step-mother, sister and brother in one of the most beautiful, desirable neighborhoods in the country (in Marin County); his step-mother is an artist and encourages Nic’s own artistic skills. He is not only smart and well-loved by his teachers at his exclusive private school—he’s an agile athlete too, and has the time and money to surf. His father joins him and takes the kind of interest in Nic’s activities that most kids only dream about.

How does all this turn out so terribly wrong? Nic experiments with alcohol and marijuana in middle school. From there, he moves on to harder drugs. After going away to Paris as an exchange student, he not only comes home with an ulcer, but has become an addict. His many efforts at rehab fail over and over in a heartbreaking cycle of addiction and sobriety. He is depressed. He uses up his health insurance allowance for rehab and then his parents dive into their bank accounts. Meanwhile, David Sheff, the father, has a brain hemorrhage and nearly dies. It seems he’s going to have to let go or he won’t be around to raise his younger children. Yet even his father’s near death doesn’t stop Nic’s addiction. He takes up with a girlfriend who shoots meth and speedballs with him.

Since Sheff has done so much research, he will tell the reader how meth burns away nerve endings and wipes out the brain’s dopamine (a neurotransmitter responsible for feeling good, for feeling pleasure); how addicts cough up the lining of their lungs. He points out the fact that if the body and mind are to heal, the addict must be sober for two years. Nic is sober once for eighteen months and relapses; then again for almost two years and relapses.

Tweak is Nic Sheff’s telling of his own tale, but he covers a shorter time period than his father does in Beautiful Boy. Tweak is a young adult book (it’s meant to be read by teens), and it covers some pretty scary territory. As a crystal meth addict, Nic has ‘turned tricks’ for drug money; he gets an infection from shooting up and nearly has his arm amputated. It’s tough to read about someone destroying himself—especially if you’ve read Beautiful Boy first and are thinking of Nic as his father portrays him. However, Nic’s story might be the incentive you need to bolter yourself against peer pressure, to reject a life in ruins.

I'm a high school librarian, formerly an English teacher. I love to read and my mission is to connect people with the right books. To that end, I read widely--from the hi-lo for reluctant high school readers to the literary adult novel for the bibliophile.
View all posts by Victoria Waddle →
This entry was posted in Biography/Memoir, Controversial Issue/Debate, Non-fiction, Young Adult Literature and tagged addiction, drug use, methamphetamine, parent-teen relationships, Teen Issues. Bookmark the permalink.