Posted on September 17, 2008 by Victoria Waddle 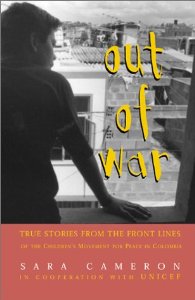 “Out of War: True Stories from the Front Lines of the Children’s Movement for Peace in Columbia” by Sara Cameron

Nine chapters of “Out of War’ each discuss one of the child leaders of the Children’s Movement for Peace in Columbia. For many years, Columbia has been torn apart by political factions, drug lords that wrestle for control over regions, gangs and extreme poverty, both rural and urban. In the mid-1990s, UNICEF (a United Nations children’s organization), the Catholic Church and others helped to create the Children’s Peace Movement. The children who tell their stories not only give us a picture of the peace movement, but of the terrible lives they have survived.

Juan Elias’ father and cousin are assassinated one day in the father’s dental office. Juan had hoped to go to work with his father that day, but was late getting ready. Maritza comes from a violent home and although she tries to make peace, she lives a dual life and is caught up in street gangs. Johemir lived alone for eight months when he was only ten years old because his mother had to take a job in another area just to survive. He and others volunteer in the “Return to Happiness” program help small children who are victims of violence—one seven-year-old boy reported having seen his father murdered, cut up, put in a bag and thrown in a river. Unfortunately, stories like this are quite common.

For me, one of the most interesting things about what the teens said about their experiences was how they had learned that revenge didn’t work. Ultimately, many talk about forgiveness and the need to be the ones to end the violence. This idea can relate to violence in other ways—what students might be experiencing here in Southern California—in cities, schools, and in their homes. I hope COHS student will comment on this. What did you think of the ‘children’s referendum’ in which millions of children ages 7-18 voted for the rights to life and peace as their most important rights? How does this help—or does it?

If you enjoyed the book, the author also wrote ‘Natural Enemies,” which is an eco-novel. If you are interested in more information about the Children’s Movement, check the list of websites and resources at the back of the book.

I'm a high school librarian, formerly an English teacher. I love to read and my mission is to connect people with the right books. To that end, I read widely--from the hi-lo for reluctant high school readers to the literary adult novel for the bibliophile.
View all posts by Victoria Waddle →
This entry was posted in Biography/Memoir, Hi-Low/Quick Read, Multicultural, Non-fiction, Young Adult Literature. Bookmark the permalink.