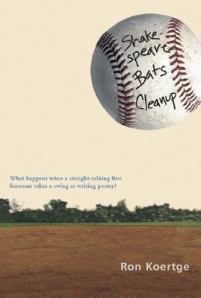 Mrs. Martin recommended this to me and asked me about the last entry—some students who read the book saw some hidden meanings there. Well—hidden meaning? That was intriguing enough to get me to read. And now I want to recommend this book to you—it is so short, it’ll take you about an hour to read.  And yet it deals with so much.

Kevin is fourteen. He’s a great first baseman and baseball is his joy, but when he gets mono, he has to stay home in bed. His father gives him a journal to pass the time, and he decides to write a few poems to deal with the break-up with a girlfriend and more importantly, with his mother’s death. What’s fun is that he writes poems about these things—a sonnet, a ballad, a pastoral, a haiku (OK, that one is funny), blank verse (unrhymed iambic pentameter), couplets, a sestina—but you just smoothly read through these poems without knowing what he’s doing. What you do know is that through these forms, Kevin does a better job of expressing his emotions. Instead of saying, “I’m bummed that my mom died,” his images and language show you what his mother was like and why he misses her so much.

So, yeah—read it. As for the hidden meaning? I didn’t get it, but if you do, let me know!

I'm a high school librarian, formerly an English teacher. I love to read and my mission is to connect people with the right books. To that end, I read widely--from the hi-lo for reluctant high school readers to the literary adult novel for the bibliophile.
View all posts by Victoria Waddle →
This entry was posted in Fiction, Hi-Low/Quick Read, Sports, Young Adult Literature. Bookmark the permalink.